Heading down towards the Gulf Coast, we drove that iconoclastic road, Highway 61, of devilish fame. We passed many crossroads but, sadly, Fred’s guitar playing is no better. Actually, Highway 61 was a very pleasant drive, not at all evocative of hard labor or oppression. It was an easy drive with no traffic though Fred was amazed when we came to a four way stop, where two four-lane highways crossed, in the middle of a small town, and nary a traffic light in sight. Such faith in human nature that traffic rules will be obeyed! (Or maybe everyone KNEW where the devil hung out.)

We crossed into Louisiana and found ourselves on a 19-mile bridge. Yes, we had arrived in the swamps and the road was built on pillars over the shortest distance through the swamp, 19 miles. Quite amazing. We stopped at the Visitor Center and enjoyed free coffee and a short movie. They are still building the whole complex and it is going to be well worth a stop when finished. But it did not tempt us to stop for lunch, though a restaurant covered in folk art called Crazy Bout Catfish did. We had a great lunch and both decided we liked crawfish. We knew we liked catfish courtesy of Catfish Dewey’s in Ft. Lauderdale, Florida! 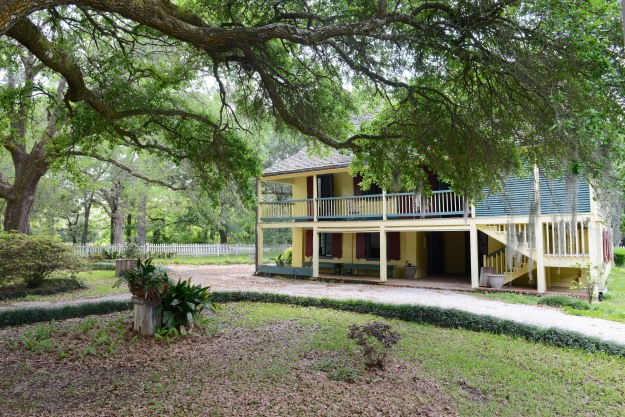 Creole “raised cottage.” How the creoles, not the Acadians, lived

We were entering Acadia and the blending of the Acadian and Creole cultures and Denise wanted to visit a museum, the Longfellow-Evangeline State Historic Site, as it specifically documented their lifestyles, customs and culture. It was a fascinating place where you can see both an Acadian farm and cabin and a French Creole built Raised Creole Cottage. Both were furnished with appropriate furniture and tools. While there, we chatted to one of the Rangers and she recommended we head for the swamp, where a friend of hers owned a business. He would let us camp on the edge of the bayou. So we headed deeper into the swamp and indeed found Champagne’s Swamp Tours. We took swamp tours when living in Florida, but decided to join the evening tour in a small, flat bottomed boat. It was quite an experience and well worth it as you got to see everything up close and very personal. We saw at least a dozen alligators and various birds, including an osprey sitting on a branch munching on a fish. Everyone was snapping photos and it did not move. 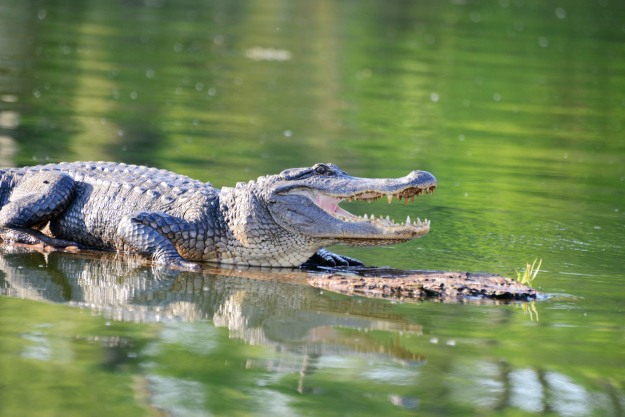 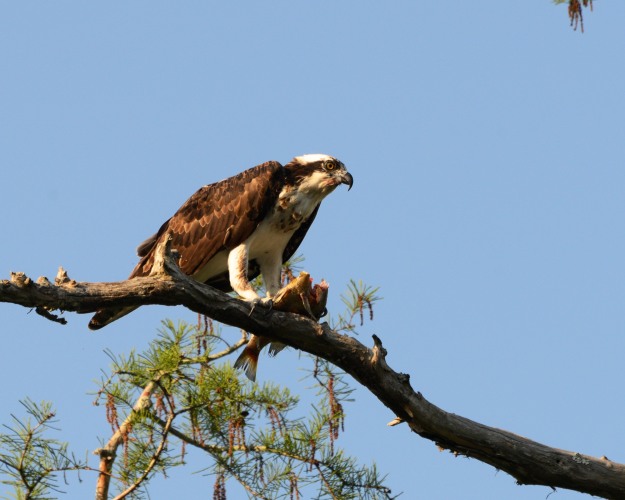 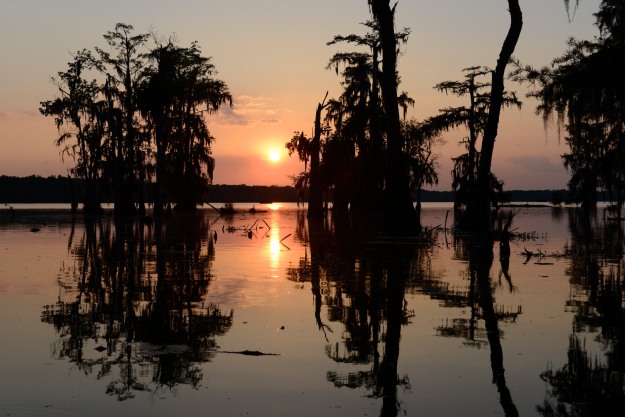 Sunset on the Bayou. 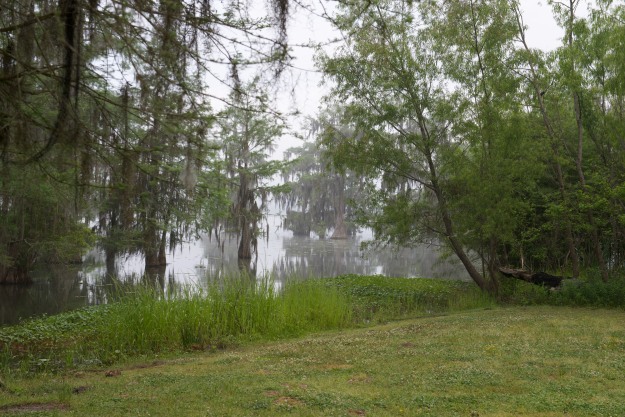 We moved on, the next day to Avery Island, home of Tabasco pepper sauce. We have used the stuff for years and, a bit like visiting Lynchburg, the home of Jack Daniels, we wanted to make the pilgrimage. While the tour itself is a bit underwhelming as, unlike the Jack Daniels tour, you do not get to visiting the actual production or curing facilities, it is well worth the one dollar toll to get to Avery Island, if only to trace the fascinating history of the place. Avery Island is actually a salt dome and while most of the peppers are actually grown in Central America from seeds from Avery Island, the salt mine is still active and the barrels are still covered with salt during the aging process. And where do you get primo barrels in this day and age? From Jack Daniels, of course. In fact, they are used much longer to age Tabasco than they are to age Jack Daniels. Worth noting – Tabasco gives out more and better free samples than does Jack Daniels!