Our next stop was in Nevada to visit friends. They are long time travelers who recently moved to Nevada following a disastrous house fire. (http://robinsonfuso.com) Now established in Nevada, Jon has let his tool and equipment fancy take flight and has, I think, one each of everything from 3D printer to tractor.

The perfect place to pull out the cassette toilet and replace it with a composting toilet. We loved our Nature’s Head on the Tiger, but this time went with a C-Head as it is a better fit for the tiny bath on the 917. Jon was in fine form, machining a foot for the front of the toilet, reworking the teak shower floor, 3D printing a shower plug, and even repurposing the fan and vent from the SOG so that the C-Head has a power vent. Did I mention Jon’s superb craftsmanship? 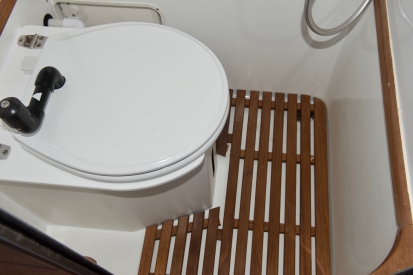 Finished, with the teak flooring adjusted.

Thetford cassette, on its way out.

Test fit of the C-Head base.

And if you were wondering, the C-Head is wonderful. (http://c-head.com) Look for a compare/contrast with the Nature’s Head in a future post.

Time to head east for our appointment at Terry Lee Enterprises in La Junta so we set off east along Route 50.  What more could we ask?  The pavement is good, the traffic light, and the scenery spectacular. Plus we know where the camping places are.  We ran in and out of rainstorms as we drove, which helped to explain how green everything was this year (much greener than the last time we drove Route 50 two years ago).

And we stopped, as always, in our favorite town of Ely.  Ely always provides what we need, when we need it and whatever it may be.  Previously we needed a car wash, a new fuse for electric steps, and espresso.  Ely provided.  On that trip we discovered the Happy Valley Chinese restaurant and thoroughly enjoyed lunch there.  Another time, all we needed  was dinner at the Happy Valley restaurant and a state park for an overnight. Again, Ely provided. This time we needed peat moss in a reasonably sized package for our new composting toilet, a supermarket, and of course lunch.  Ely provided, so we bought a perfectly sized pack of peat moss and our Chinese lunch was wonderful.  (And the portions so large that we got three more dinners out of it!) Unfortunately we have never managed to be there at the weekend to ride the steam train, but we live in hopes that we may manage that one of these days. Any excuse to return.

We continued east towards the Great Basin. 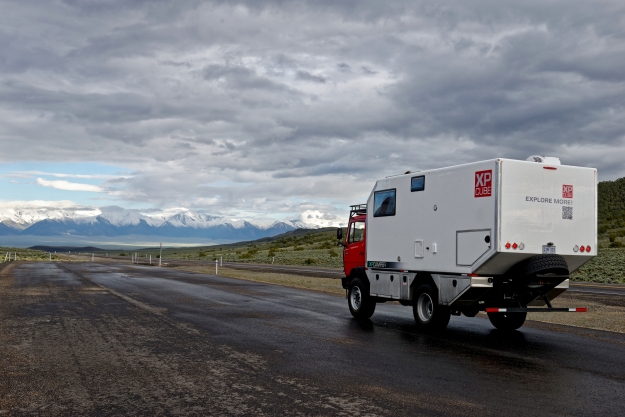 After a nostalgic night’s camping in the Great Basin National Park, we entered Utah near the town of Delta where Route 50 wanders rather and finally becomes 1-70.

Denise admires the not so dry lake.

Pronghorn(?) in the Great Basin.

But we were back on 50 as we left Grand Junction, heading through Colorado. Another night of nostalgia as we found the Dry Gulch campground in the Curecanti National Recreation Area for the third time.

Our first tourist stop was Fort Uncompaghre in Delta, Colorado.  (http://fortuncompahgre.org) It took us a while to find it and we enjoyed our driving tour of the town!  The fort, like Bents Old Fort near La Junta, which we had previously visited, was a trading post in the 1800’s. This is a reconstructed site and extremely well done.  We have visited a couple of these forts and we learn something new each time.

The whole history of the Santa Fe trail and the “Old Spanish Trail” to Mexico City and Los Angeles (La Ciudad de Nuestra Señora de los Angles) is fascinating and relatively little known. This time we learned how valuable were the furs which the trappers caught and the reason for the preference for beaver hats in Europe – the fur is naturally waterproof. Georgette Heyer and Jane Austin fans take note! Now you know why Mr. Darcy, and others, favored curly beaver hats.

The various trails, Oregon, Santa Fe, “Old Spanish”,  and the rest, are interesting studies in geography as destiny. Some of them went hundreds of miles out of the way to find a lower pass through the mountains, or more assured water and grazing for animals. We you consider that they were all traversed mostly on foot, this could mean weeks of extra travel. On the other hand, it could be the difference between arriving alive and perishing in the desert. In contrast, European trade routes were known and in habited for thousands of years. The only thing similar may be the Silk Road. Even the trans Sahara routes had been used for millennia.

We spent the night at the Winery of the Holy Cross Abbey, in Cañon City, Colorado, courtesy of the Harvest Hosts group.  (Of course we purchased a couple of bottles of wine, which we shall enjoy!)  It was a pleasant spot with nice views of the abbey.

On a whim, we decided to ride the the Royal Gorge Railroad through Colorado’s Royal Gorge.  This proved to be great trip on a beautiful sunny morning.  We booked breakfast on the 9.15 a.m. train and enjoyed our 2 hour ride, through the Gorge, with eyes open for animals, while enjoying our breakfast burritos and coffee.  We saw various deer, both mule and pronghorn, and missed the supposed sightings of the bighorn sheep, though some saw them!  The camouflage is so good it is hard to see the animals unless they move. 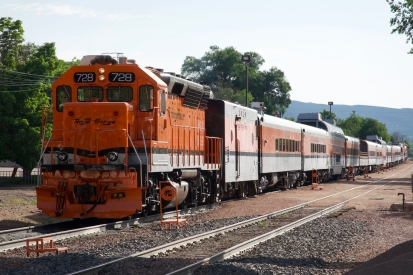 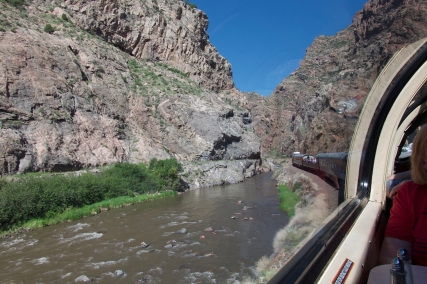 We then headed up the road to La Junta. We checked into the little motel and took the 917 to Terry Lee Enterprises bright and early on Monday morning. We didn’t need much, and indeed, the spare tire carrier probably could have been modified by any welding shop, but it felt good to let Billy modify his own creation. We changed every fluid and replaced several pinion seals. The bottom of the truck is much cleaner now. 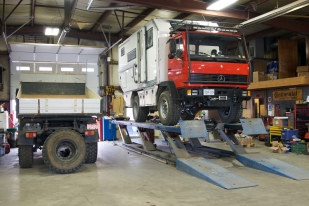 The truck done, we headed back to Cañon City to buy more wine. (Well, it was excellent and they let us stay a second night!) The next morning we took a four mile walk along the old railroad path overlooking the Arkansas River. We went through three tunnels which had been cut by hand by prisoners from the penitentiary in Cañon City. Cut by hand as no one was going to give prisoners dynamite! We took photos of the train as it went and returned and then we met a herd of big horn sheep. None of this viewing through the train window – we were up close and personal. To be fair, I think the sheep were much less impressed than we were. 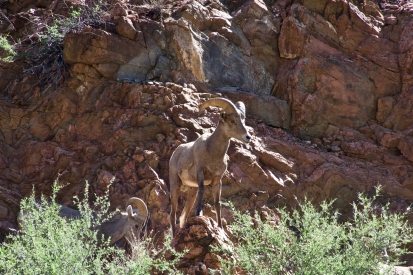 King of the Castle!

Can you find the sheep?

We then headed off for Leadville with an afternoon coffee stop at the Brown Dog in Buena Vista, another find from a previous trip. (https://browndogcoffee.com) We found a wonderful, huge dispersed camping area just outside of town and settled in for the night.

The great AT&T coverage let us make our first blog post of this trip.

2 thoughts on “Why We Love the Loneliest Road or back on Route 50 again.”