England is notorious for rainy weather, but as noted here: http://www.pbase.com/diplostrat/uk we have, on occasion, been really lucky with the weather. (Of course, there was always this trip: http://www.pbase.com/diplostrat/wall when it seemed to do nothing but pour.) Our luck held again this year. And we were even able to see the “sunne in splendour.” (More about the “sunne” later.)

NOTE: This post incorporates a new feature; click on any picture and you get all of that grouping as a gallery.

Our trip this year was a family visit and we enjoyed revisiting familiar haunts such as the grounds of Petworth House and Winkworth Arboretum, both National Trust properties in Sussex. These visits were conducted by Lucky, Denise’s sister’s energetic border collie. Lucky assures a vigorous walk and that we pay a lot of attention to whether there are deer nearby, so as to assure that she doesn’t chase them. And one of these days we must take the time to visit the house itself (a “stately home” in true British fashion), especially since part of Washington, DC was named Petworth after it. As always, we found that food played a large part in this trip. Good food that is; the UK is no longer known only for overboiled vegetables, and we found our waistbands expanding with each new food experience, beginning with dinner at Lemongrass, a good Thai restaurant in Horsham, Sussex. http://lghorsham.co.uk

Each time we visit the UK, there is always more to see. For such a small island there is a wealth of different sites to visit. Friends of ours, who live near Bristol, have always been superb guides showing us what is different and unexpected. They live in Thornbury, a beautiful little town. 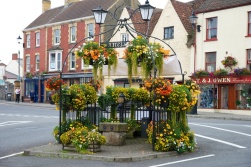 And they are really very good, too. 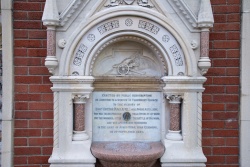 Kandahar has been a contentious city for a long time.

And they did not fail us during this visit. We began with a day in Bristol, which included a visit to the Bristol Museum, a wonderful visit to Brunel’s SS Great Britain (http://www.ssgreatbritain.org), and ended with an amazing cream tea (fresh scones with clotted cream), enjoyed at the Avon Gorge Hotel with views of the Clifton Suspension Bridge. Fans of ships and history will love the Great Britain, now rescued from her grave in the Falkland Islands, and on incredible display in the very dry dock where she was built.

One of Isaac Brunel’s many great achievement, an iron hulled, fast ocean liner. Now on exhibit in the dry dock where she was built.

Way ahead of her time, this propeller was too efficient for the iron of the day and had to be replaced by one with fewer blades. Later, it was replaced by a simple two bladed propeller that could be retracted entirely to all the ship to use sails only.

The after portion of the deck was reserved for First Class passengers only. (The animal stalls were all forward.) The skylight looks down on the First Class saloon.

The Great Britain museum included lots of wonderful displays, like this one on the dock, which gave you a tremendous feeling of what a voyage would have been like. 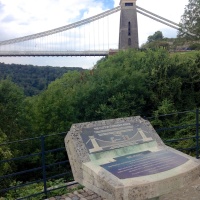 Brunel’s Bridge over the Avon Gorge 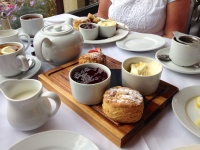 A Cream Tea to die for

The following day we went to Tewkesbury, a historical town in Gloucestershire, known for its twelfth century Norman Abbey and for its medieval architecture. The crooked timber wattle and daub houses line both the main and side streets, so turning into an alley has its own special charms. The main street is lined with medieval coats of arms, each of which belongs to a participant in the Battle of Tewkesbury in 1471 during the Wars of the Roses.

The Abbey Church of St. Mary the Virgin, or Tewkesbury Abbey as it is better known, is quite beautiful with an original decorated ceiling still in existence. The ceiling design of “the Sunne in Splendour” and other ceiling decorations reminds us that the use of color was a large part of the original decoration of these cathedrals and churches although now they are uniformly grey. The “sunne in splendour” was a symbol of the house of York and emblem of Richard III, and its position in the ceiling reminds all Lancasterians that the House of York won the Battle of Tewkesbury in 1471. (Those who were not dragged from the Abbey and executed.) True geeks will be fascinated to study “blazoning”, that is, the formal description of coats of arms. The “sunne in splendor” is a blazoning term. (http://en.wikipedia.org/wiki/Blazon)

Saved from the dissolution of the abbeys as it was, and still is, a parish church. (And they paid off, as well.)

The various coats of arms are of the Yorkist and Lancastarian families who fought at the Battle of Tewkesbury.

The Abby interior, showing the sun in the ceiling. People forget that, back in the day, the interiors of English churches were highly decorated and painted in bright colors.

The Yorkist Sun, set in the ceiling of the Abbey to forever remind all who won the battle.

Interesting also was our visit to the John Moore Museum based in a row of fifteenth century row houses, which included the restored and refurnished Merchant’s House showing living and working conditions for a Tudor merchant’s household.

The rest of the day was spent visiting Berkeley Castle, a unique Norman/medieval castle, which has been lived in by the same family, the Berkeleys, (of Berkeley Square and USC Berkeley fame) for 900 years. It is a magnificent home to visit as it is not in ruins and is full of collections of art, furniture, and tapestries displayed in the original rooms. The Great Hall really looked like a Great Hall and still had the balcony for the minstrels. http://www.berkeley-castle.com/index.php

The castle was “slighted” by the Parliamentarians. Now the gap in the walls on the left of the photo cannot be repaired – by Act of Parliament.

The family apartments are to the left and still occupied.

An interesting reminder that Berkley Castle is still in the family.

A previous Berkley is said to have used this sun dial to time, and limit, sermons.

Note the huge spits to use on the rotisserie in front of the fire. 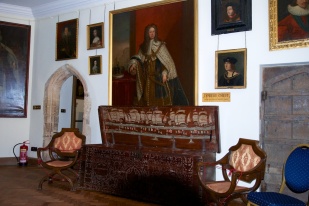 The decorations are very detailed paintings of the evolution of ships from galleys, to galleasses, to galleons. 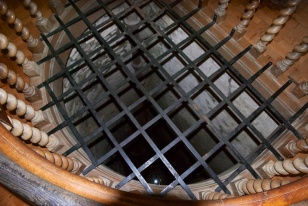 Long way down and no steps. Once you went in, you weren’t coming out.

On to Stourhead, a National Trust property with beautiful gardens around a lake and a wonderful hotel called the Spread Eagle Inn. We enjoyed our stay and found the food plentiful and excellent (we gained at least a pound each here and we only stayed one night!). We were up walking around the lake before breakfast so we could manage to eat it (it was included!). Denise’s father lives near here so we were able to visit him while in the neighbourhood. 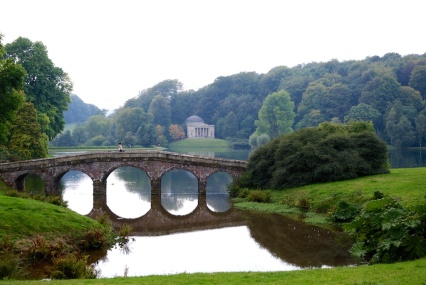 View of one of the many “temples” across the lake. 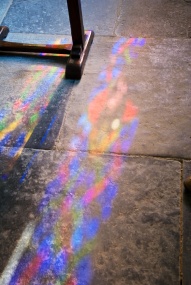 Reflections from the stained glass window in the church.

The main purpose and highlight of this UK visit was the birthday celebration for Denise’s brother, which took place at “The Feathers” a historic hotel, full of odd staircases and winding passages, in Woodstock, near Oxford. (http://www.feathers.co.uk) As we were staying three nights, they upgraded us to a suite. And what a suite! We were stunned – how often do you have a dining room table with six chairs, two sofas and a couple of armchairs, one and a half bathrooms and a king size bed in a hotel room? It was all quite delightful. Excellent breakfasts were cooked to order, and with the excellent cream teas available at least another pound was gained!. Though to be fair, we did not eat lunch!

The birthday celebration began with a morning of punting on the River Cherwell in Oxford. Fred is now an expert punter, which is a skill that he hopes to put to further use! It was exciting at times but we all survived without a dunking! Then in the evening some nineteen friends and family gathered for a birthday dinner in Woodstock. Great fun. 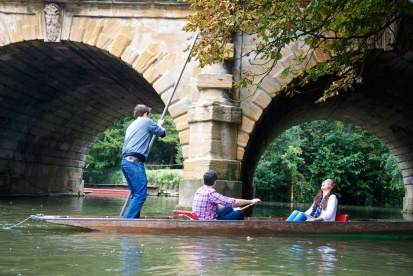 Harder than it looks! (Especially with a pretty girl laughing at you.)

The final part of the birthday celebration was a daylong outing on the Northern Belle, from Sheffield to the Yorkshire Dales. (http://www.belmond.com/northern-belle-train/) The entire train consists of rebuilt period style restaurant cars of the Victorian era and we were certainly pampered and wined and dined at brunch and at dinner as the train made its way to Oxenholme on the southern border of the Lake District and then back to Sheffield. We visited Wensleydale for cheese samples and purchase as part of our Yorkshire Dales afternoon tour. 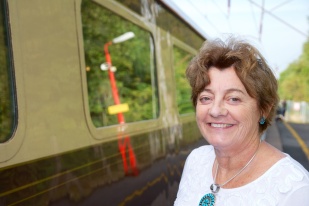 Denise and the Northern Belle 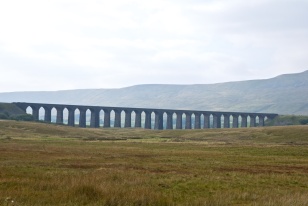 On the way to Sheffield, we visited a most interesting National Trust property called Keddleston Hall, dating from 1765. (http://www.nationaltrust.org.uk/kedleston-hall/) The main house was built more as an art gallery than as a family seat. The attached church has some lovely tomb carvings. 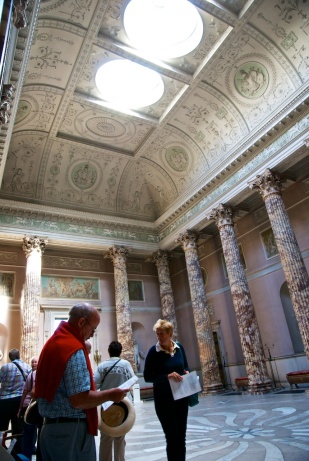 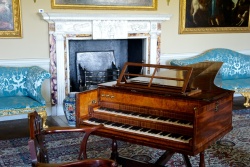 If you are going to be the Lord of the manor, you have to dress the part. Note the red heels (very stylish) and the garter.

Stairs down to the lawn; several hundred acres of lawn.

Almost every detail of these carvings carried symbolism, from the accurate clothing, to the pious posture, to the images of angels, weapons, etc.

Rather interesting date; the year is given in both New Style and Old Style.

We spent the night in Stratford-on-Avon, where we enjoyed a walk along the River Avon and a wonderful dinner at Edward Moon Restaurant. Named for a traveling chef in the British Colonial Service during the early 1900’s, we enjoyed hearing of the history of the name from our waiter, a charming and charismatic gentleman originally from French Guyana who kept us fully entertained for the duration of the meal. 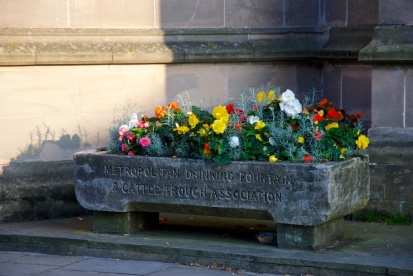 And, yes, you can get get to all of those places by canal boat.

You can get anything from a canal boat.

I must also mention the meal we had at Maveli in Sheffield where Fred discovered South Indian food and dosas. And while we are talking of food we must also mention the always wonderful fish and chips from Rockfish in Dartmouth. We were not fortunate enough to arrive on the evening when the local band was performing sea shanties, as happened on our first visit in 2012, but the food is worth it even without music.

Although this trip was not made in Ndeke Luka, it would not be complete without at least some Tiger content. We enjoyed a visit with long time Tiger owners, Rick and Kathy Howe and were able to host the Travelin Tortuga in Devon. (http://www.travelin-tortuga.com/Travelin-Tortuga/index.html)

And to close, some random images of southwestern England. 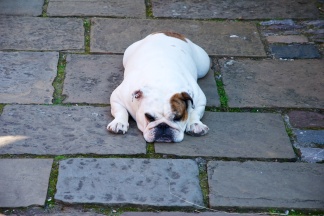 … having a hard day at the Dartmouth market. 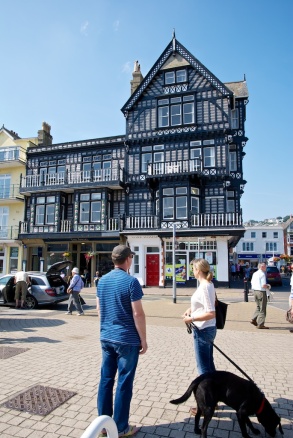 Historians will note that the black paint on the beams is not original, but rather a Victorian affectation. 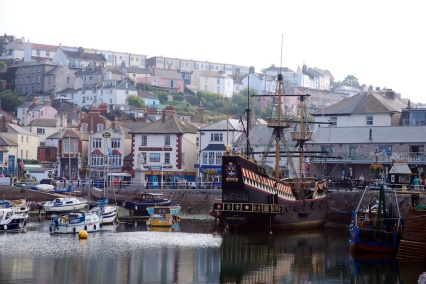 Imagine sailing all the way to California in this.

Old phone box now used as village library. (Not a lot of room for browsing.)

We arrived home in time for a weeklong diet before heading off to retrieve Ndeke Luka and head for the Overland Expo in Asheville, NC.