Fred remembers staying at the Dead Sea Hotel as a child. It was right at the mouth of the River Jordan, just a few miles from the main Amman to Jerusalem road. The hotel is long gone now, but it was quite lovely.

The Dead Sea is famous, of course, as the lowest point of dry land on earth, at about 1300 feet below sea level. The used to be a sign on the road to Jerusalem to let you know when you had climbed back up to sea level. Like the Great Salt Lake in the United States, it is very salty, so salty that it is almost impossible to swim underwater.

We checked into our hotel and decided that we must do the needful and swim in the Dead Sea. So we changed into swim garb and headed out. With the loss of the West Bank to Israel, all of the hotels are in a huge tourist complex on the east bank of the sad and a hit higher up the slopes. The level of the sea has dropped so much that it is actually quite hard to get to the water. We walked for about 20 minutes down to the “beach” which turned out to be rocky and very hard to walk on. But we made it into the water, flopped around a bit, and then emerged. “Been there, done that”!! It is indeed salty, so salty that you cannot sink and it really stings if it gets onto your face! We rinsed off, walked our 20 minutes back to the hotel and Denise enjoyed a swim in the lovely warm pool. Grumbling that “it wasn’t like that in the old days!” Fred went off to enjoy a massage in the spa.

The Marriot Resort at the Dead Sea.

We watched the sun set over the West Bank and the lights of Jerusalem start to show on the ridgeline and headed for dinner. Fred was amazed, Jerusalem simply wasn’t that large back in the day.

Sunset over the West Bank.

We then went to watch the belly dancer perform while we enjoyed Turkish coffee and even stayed for her second show before calling it a night! Fred’s mother could never watch scenes of “belly dancing” in Hollywood films. She was an enthusiastic ballroom dancer and one night, in Beirut, she and a friend, also an excellent dancer were watching a dance performance. When the set ended, the friend asked the dancer to show her some of the moves. The dancer laughed and said, “Oh Madame, for you it is too late; I stared learning when I was five years old.” So although Rita Hayworth and others are indeed lovely,  their Salome initiations look very awkward when you have seen the real thing. It was pleasantly warm and it was fun to people watch. Everyone from tourists in shorts to ladies in abayats – Jordan is a wonderful country. On to Madaba via the Baptismal Site

Off again the next morning, we made a last minute decision to go to the Jordan River Baptismal Site, a visit that proved fascinating and far more interesting than Fred had anticipated. Fred was in curmudgeon mode, grumbling that he had already been to the river on a picnic and one of his friends had “baptized” himself by falling in. (His mother had not been pleased.) We drove to a central ticket office/car park where we waited for a bus and guide. The Jordan River is the border between Jordan and Israel and security is very tight and thus the various sites can only be visited in a group.

The first thing that we learned is that many of the sites were re-identified and excavated only after Fred left Jordan in 1960, so, with the prospect of “new” ruins, Fred got all interested. Like all things Biblical, there is controversy about the Baptism. The Gospel of John says that it took place in “Bethany beyond Jordan.” The River Jordan has, of course, moved many times over the years. It is also worth considering that while may people today ascribe special qualities to the River Jordan, to John the Baptist, it would have simply been another, albeit larger, river. Thus there is considerable reason to believe that he would have actually performed the Baptism in the clear waters of the spring at Bethany, rather in the muddy river – what is the point of a spiritual cleansing in dirty water. Whatever the truth, by third century the early Christians accepted Bethany as the site and built many churches there. (The site is on the Madaba Map.) These churches were destroyed or fell into disuse with the Muslim conquest and are only now being unearthed. There is an excellent site on the subject and if you drill down, there are detailed accounts of the history of the site. You must remember, however, that this is a Jordanian government site and there is intense “competition” from the Israelis to attract Christian, especially American, tourists. Read on: http://www.baptismsite.com

After a short wait, our bus arrived and off we went, passing first by the site of Elijah’s ascension, before other sites connected to John the Baptist. As noted on the site linked above, you could spend a long time visiting all the sites in the local area, many of which provide an interesting insight into the nature of early Christians. The Jordan River is much reduced in size since the 1950’s in part due to water being removed from it by Israel. (Israel’s “miracle in the desert” comes with a price, much like our depletion of western aquifers.) The river has always been  muddy and most historians have established by reading travelers’ accounts and through archeological digs that the true baptismal site is probably about 60 meters from the present river, at the site of a spring which used to drain into the river. There are ruins of the various churches which were built over the spring at different times and it is very possible that this clean spring water was used for baptisms, rather than the always muddy Jordan.

This link describes the rediscovery and the purpose of the foundations in the photo:http://www.baptismsite.com/archeological-findings/ Ruins of Byzantine Church constructed over the spring where it is believed that John baptized Jesus. The large objects are the foundation pillars. As was the Byzantine custom, the church often completely enclosed the site.

Modern Church at the Baptismal site

The Jordan River site on the Israel side has been highly developed for tourists and we watched various visitors immersing themselves in the muddy and unsavory looking water. We then headed out to Mt. Nebo, where there is an old church called the Moses Shrine, which is reputedly where Moses saw the Promised Land before he died. The church was unfortunately closed but we did see an old mosaic from the church and, of course, a huge selection of schoolgirls! As a historical note, it is worth noting that one cannot see the land “flowing with milk and honey” from Mount Nebo, only the parched Jordan Valley. There has long been agriculture around Jericho, but the rest of the landscape, as you can see, is rather bleak. The fertile lands lie far beyond, between the Mediterranean and the hills were Jerusalem is located. It is possible that Moses stopped here because the people of Jericho blocked passage. Whatever the truth, Mount Nebo has long been a site of pilgrimage, traditionally along the old Roman road from Jerusalem.

Beautiful inscribed column, dedicated to Caesar Antonnius Pius. (Scholars debate his success against the Parthians and the Britons.)

On to Madaba, where we stopped first at St. George’s Church to see the famous mosaic map of the Holy Land, crafted in AD 560, it is the oldest map of the region and gives many insights into the region, including, as noted, the location of the Baptismal site. Jerusalem is shown, as is the Dead Sea with the fishes swimming away from the salt. There is also a small museum at the Visitor Center which we enjoyed.

Close up of the medieval city of Jerusalem, showing the Cardo down the middle and the Church of the Holy Sepulcher in the foreground.

Beautifully made of mosaic. Jerusalem is at the center, with the Dead Sea above. The Jordan River enters from the left, with the fish swimming away from the salty sea. The Baptismal site is just above the river, “Bethany over Jordan.”

The map was on the floor and suffered as the church has been in daily use for a thousand years. 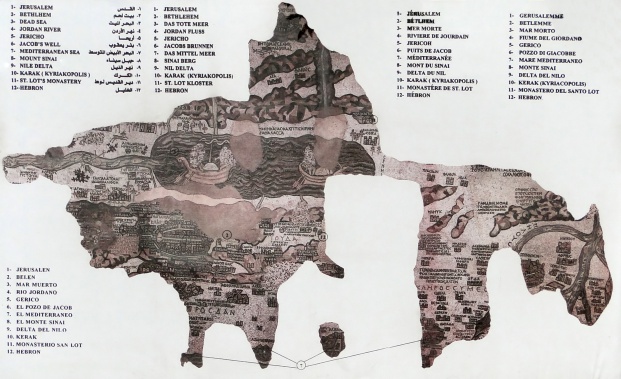 After a quick lunch, we headed to our hotel which proved to be in a residential neighborhood and quite nice. We took a much needed nap and then headed down to the pool for coffee and a nice chat with the Hotel Manager as the sun set. Dinner was somewhat of a disappointment but we had not noticed any obvious restaurants in walking distance, so decided to stay put. We should have been more adventuresome!