With apologies to the Bard, the question is not “To camp or not to camp?” but “Where to camp?” Whether ‘tis nobler in the mind to seek out a pristine forest or local park, or to yield to the temptations of a commercial campground with power and water. With the temperatures soaring into the stratosphere, we have done a bit of both.

Our first campsite in Texas was just over the state line in a county park. It was really more of a day park but they did allow some camping and once we had bought a permit for the princely sum of $3.00 they escorted us to our site. They pointed out that they locked the gates at 7:00 PM and wished us a pleasant evening. It’s the first time we have ever had a whole park to ourselves!

The highlight of our first full day in Texas was a visit to the USS Texas, which is on the Gulf side of Houston at La Porte. It shares the honors with the San Jacinto battlefield which, while preserved, sits incongruously in the midst of acres of oil refineries and holding tanks. The USS Texas is a bit unique among modern museum ships as she is a 1914 “Super Dreadnaught.” As such, she was built to burn coal, has two triple expansion piston engines, and, most unusually for U.S. battleships, she has five turrets. She served in the First World War but saw no combat. Between the wars she was converted to oil and equipped with new, tripod masts so that she resembles a famous ship that was one generation newer, the USS Arizona. Despite her age, she saw extensive action in the Second World War, most notably at the Normandy invasion and later at Iwo Jima and Okinawa. Fans of things naval will rejoice in the anachronistic combination of 5” casement mounted guns along side the ubiquitous 3”/50, quad 40mm, and 20mm guns. Highly recommended. 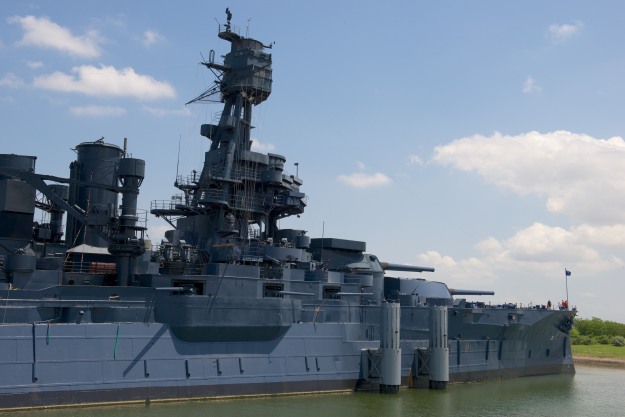 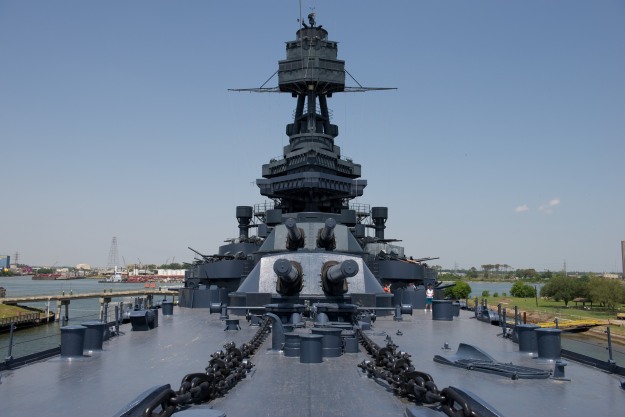 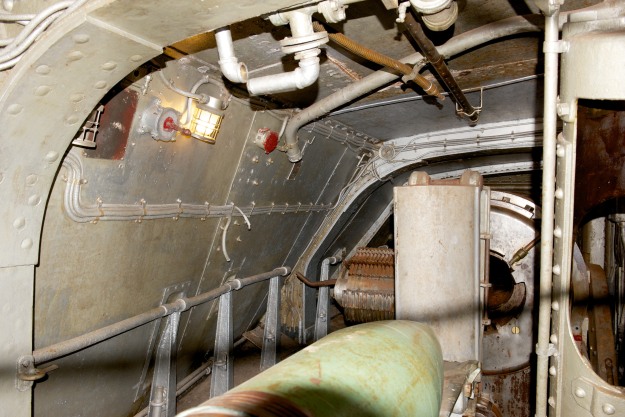 Breech of 14″ main battery gun with shell on the track. 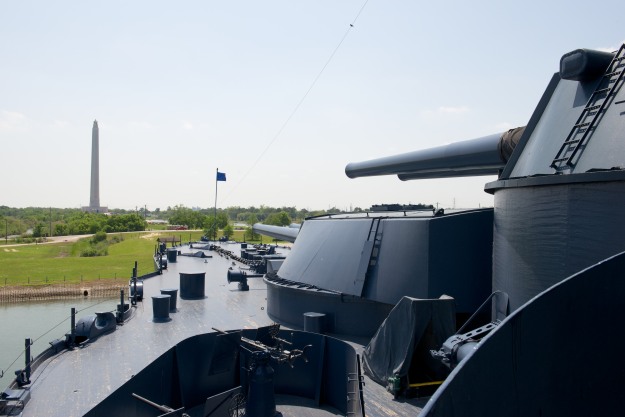 San Jacinto monument as seen from the U.S.S. Texas. 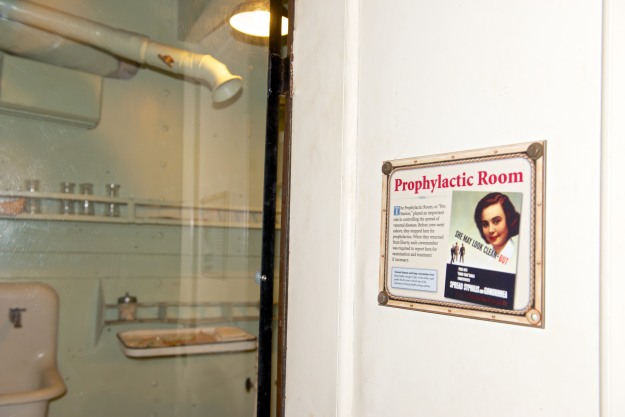 Can’t be too careful. (I won’t repeat what I was told to do with prophylactics when I was a Midshipman.)

Our second night in Texas we found ourselves shut out of the inn or at least the State Park where we stopped first. So we ended up cheek and jowl with dozens of other campers in an independent campground. If the camp was less than charming, our neighbours did prove to be and even loaned us their long handled “Class A” windshield cleaning wand and soapy water to wash our windscreen the next morning! It made quick work of a small vehicle like Ndeke Luka. We then headed to San Antonio.

San Antonio again found us in a very busy and rather tightly packed, independent campsite but with a great location on the river and very near the missions. It also had lots of shade, and better than average Internet access. Every bit of shade helped as the temperature set a new record of 99F. We ate at a wonderful Mexican casual diner across the street. Looked like nothing, but all but had a line out the door. (We were the only Anglos in the place.) We ate very well and were even serenaded by a trio of Mariachi players. At this point, it was clear that we were in Texas!

A well-placed bus stop outside the campground deposited us in San Antonio, a short walk from the Alamo, which was much easier than parking. The Alamo looked just like its photos! Of course, all true history buffs know that the actual fort, the old mission walls, were in front of the famous facade, which is only the front of the church. We were fortunate enough to join a historical lecture and learned a lot about the history of Texas, which stood us in good stead as we completed our visit in the museums.  We took a double decker bus tour that was a bit underwhelming. We thought the town had rather a gritty feel to it that did not encourage us to wander.  It may have been partly detritus due to the closing parade of the Fiesta celebration for there was a goodly amount of trash everywhere. However a riverboat ride on the river by the Riverwalk was enjoyable and well worth it. It was cool and shady for the most part also which may have helped. We lunched on the Riverwalk in a pleasant and cool Mexican café (what else?) with great people watching opportunities. 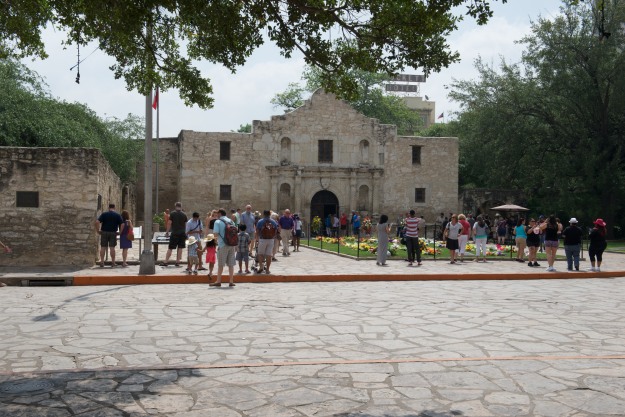 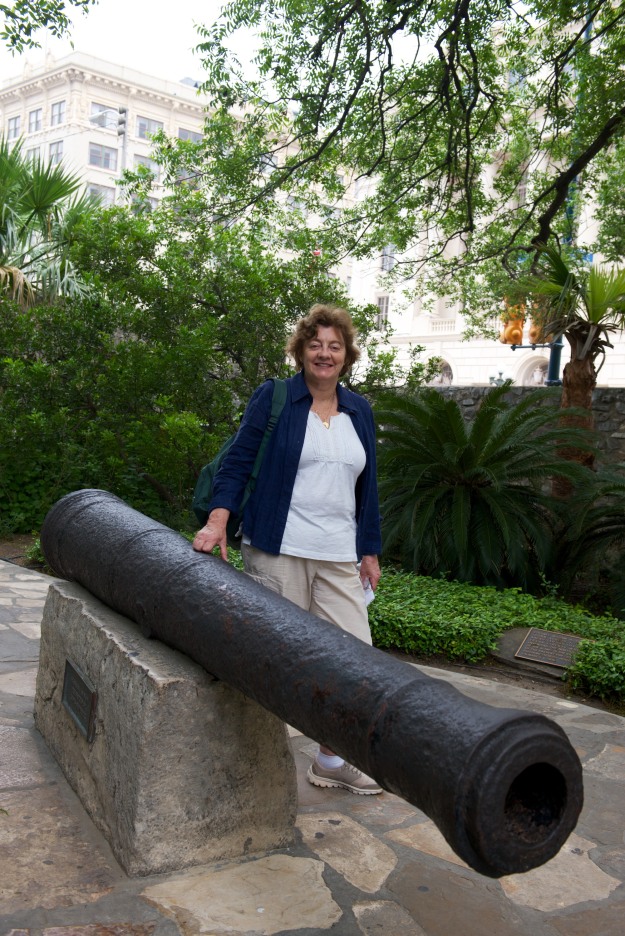 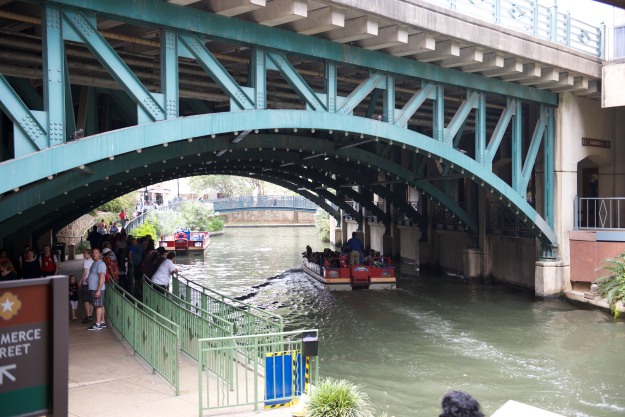 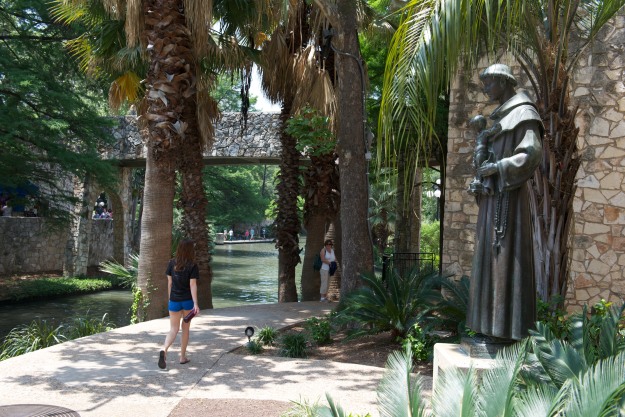 We ended our visit to San Antonio the next day with visits to two of the missions. Mission San Jose is especially worth a visit as it has been almost completely reconstructed and, as a result, looks more like the Alamo than the Alamo itself. You can really see that the missions were well built to repel attacks by those Indians who did not convert. 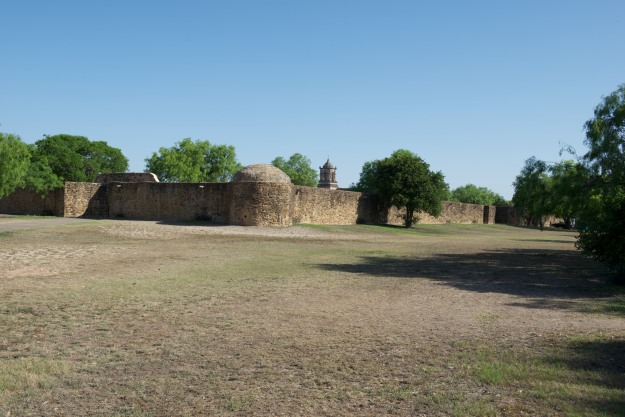 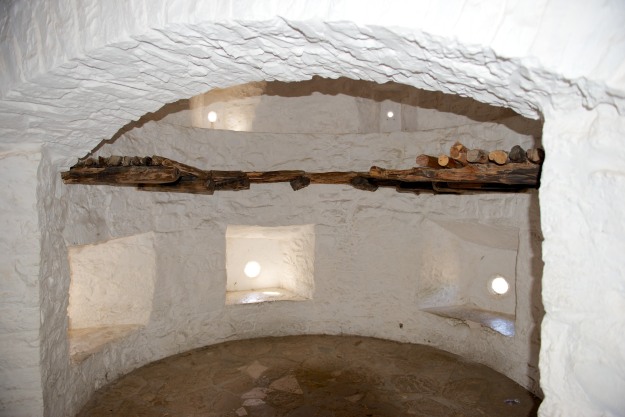 Interior of the corner bastion, cannon down below, muskets above. 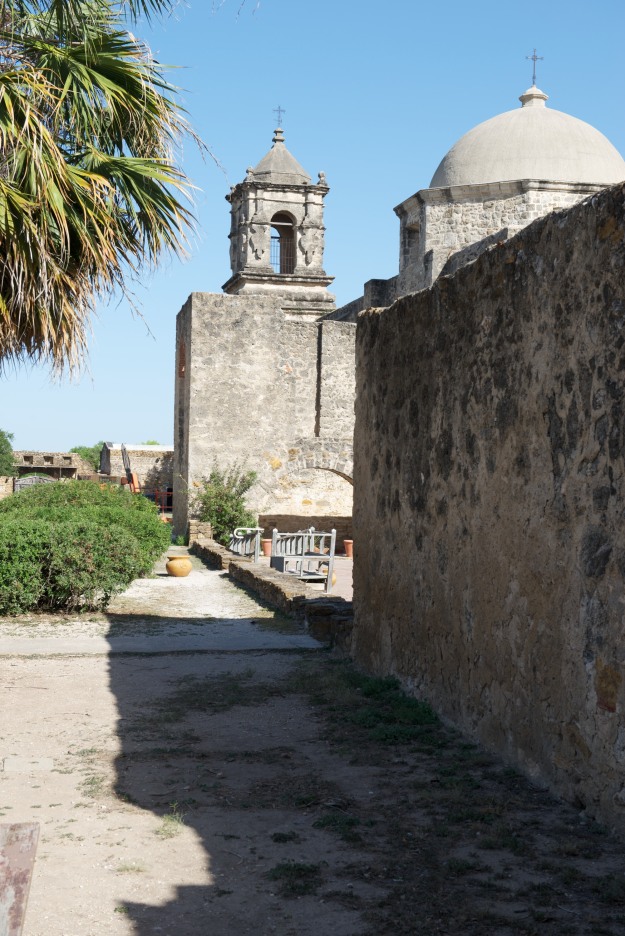 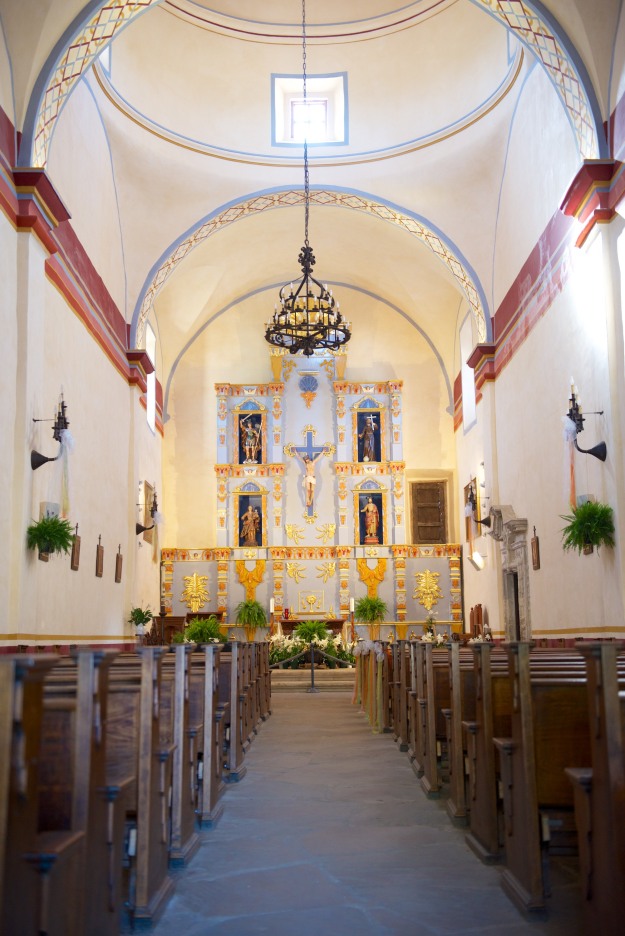 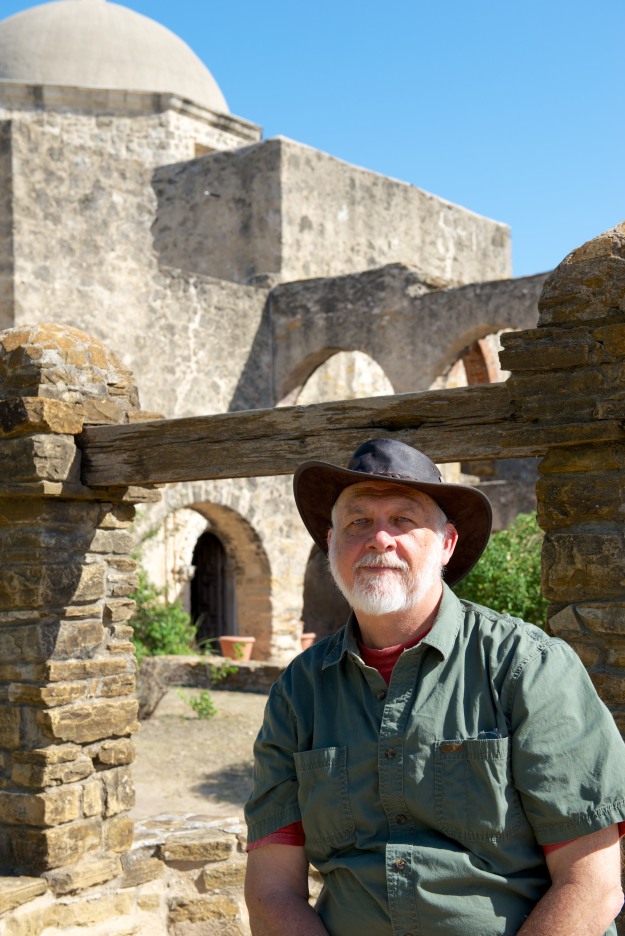 Fun Facts about San Antonio: (These must be true as we heard them from tour guides.)

— San Antonio has long had a large German population. Like Rick, they came for the waters. In this case, to use the waters to make beer. With the coming of Prohibition, they faced ruin. So they moved production to Mexico and gave their San Antonio beers new names – like “Corona”, “Dos Equis”, et al.

— The fajita was invented by a Mexican living in San Antonio. When it was a hit, he went home, hoping to make his fortune in Mexico. The Mexicans, however, dismissed the fajita as not being an authentic, Mexican dish. So he returned to San Antonio, took U.S. citizenship and opened a restaurant named “Mi Tierra.” Which restaurant is open to this day.

— San Antonio has a large flour industry, but not a lot of corn. So the German flour miller began to make tortillas from flour and they remain an option in Tex-Mex restaurants.

True? Who knows, but they make good stories. 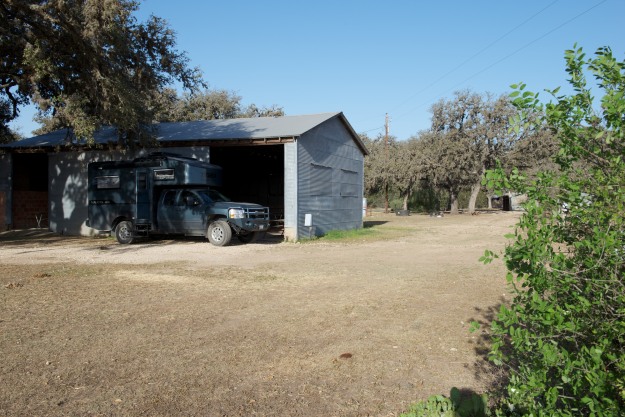 Finally, hiding from the sun at the Hill Country Nature Reserve.