Two things struck us as we drove through the lovely state of Tennessee – that it is has some spectacular grades, even though we stayed away from the Great Smokey Mountains on this trip, and that there were cemeteries everywhere! All the headstones were beautifully decorated also. Driving down I-81 with the views and the redbuds in full flower on a bright sunny day was a most spectacular experience. We stopped to explore the town of Jonesborough, a historic and charming little town with several restored buildings.

We overnighted at another winery, the Tennessee Valley Winery, run by a brother and sister from South Africa. Fred enjoyed a political discussion over a glass of wine at the picnic table with the owner as we gazed at the spectacular vista of hills. He was nice enough to allow us to fill with fresh water and to drain our grey water tank. The Tiger continues to perform beautifully under chilly conditions. The heat is well able to maintain a comfortable temperature, even at 24F. Courtesy of Harvest Hosts, we are able to camp for free. Of course, we then spend more on wine than the charges at a typical campsite. Seems about right.

We continued west and stopped at the Jack Daniels distillery in Lynchburg. We had previously visited the artisanal distillery built by George Washington near Mount Vernon, VA so we had some idea of the whiskey making process, but it was fascinating to see the same process, duplicated hundreds of times into a full-scale production. It is an interesting tour. We declined to buy a full sized bottle and regretted that they did not sell small sample bottles. After ice cream in Lynchburg, we headed off in search of Tim’s Ford State park, where we planned to camp. 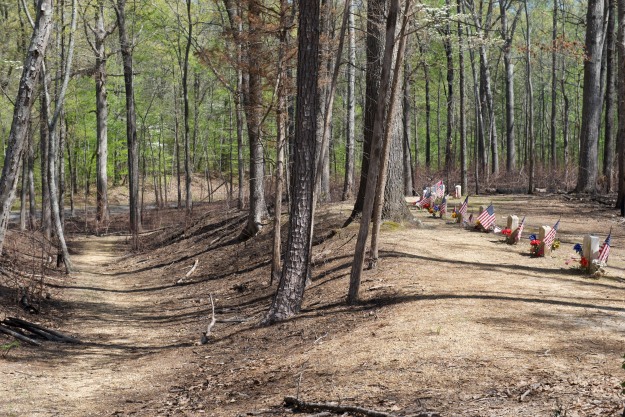 The graves of unknown Confederate soldiers on the old Natchez Trace

And on to the Natchez Trace, an important transit route for the period 1780 to 1832 especially for the Kaintucks or flatboat drivers who would float their goods to Natchez for sale and then walk home. (Before steam engines, there was no way to move a heavy boat upriver, so they floated down, sold their cargoes, then broke up the flat boats and sold the lumber and finally walked home. The return journey took at about a month at fifteen miles a day.) We decided to pick up the Trace in southern Tennessee and follow it to Natchez. It proved to be a delightful and little used two-lane highway bordered by flowering dogwoods and meadows of wildflowers. We stopped a couple of times to view a nature walk full of bluebells and other wild flowers, Indian burial mounds and the ruins of a “stand” or inn run by George Colbert who also operated a ferry across the Tennessee River. While looking around, we came upon three young armadillos, busily munching beside the road. Fred took various photos and they were quite unconcerned until he tried to pet them! Then they raced off to safety! My first wild ’dillos! Bleu was most interested. 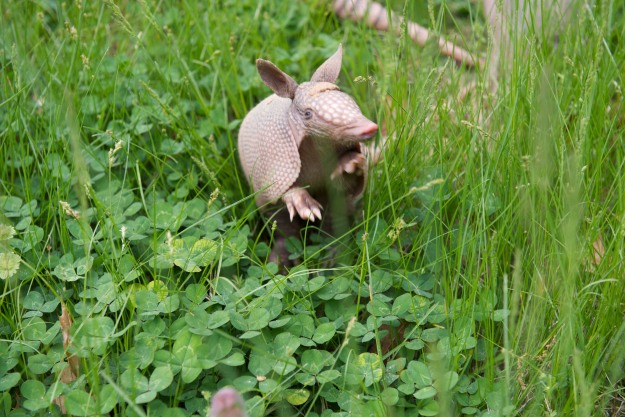 Our campsite for the night was at Tishomingo State Park, Mississippi. A pleasant wooded spot, we ate outside and brought Bleu out for a little. He is adjusting very well to life as a camper cat!