Once out of Florida, we knew we had a target date for arrival in Flagstaff so it was “pedal to the metal” time.  That said, we did manage to linger a few times along the way, though not as many as we would have liked.  We found a lovely National Park Service campground on Davis Bayou at the Gulf Islands National Seashore, near Biloxi,  in Mississippi and spent a very pleasant evening and night there.  We think that Blue stayed up too late there, checking out the wildlife!  He slept like a log all the next day!

We then headed into Louisiana on 1-10 but tried to cut across too far north.  All the charm and wonderful seafood we remember from our previous visit to Louisiana last year, was absent.  Oh well, we shall know better for the future … stay by the coast in Louisiana!  And then on to Dallas.  We had requested a driveway and some Texas brisket from an internet friend of Fred’s and indeed we received both!  A wonderfully large and effective washing machine solved our dirty laundry problem and a dinner at Spring Creek Barbecue produced brisket so tender you could cut it with a fork.  (http://www.springcreekbarbeque.com/garland.htm) To say that we ate too much is putting it mildly!  There is a lot to see and do in the Dallas Fort Worth area so we shall most definitely stay longer next time, but the weather was iffy the next day and storms were forecast, so we headed out. We did take a moment to view the ranch used as “South Fork” in the television, “Dallas.” (Ironically, neither of us has ever watched the show.)

And indeed we drove through a spectacular storm with sheeting rain and lots of thunder and lightning.  Fortunately for us, the tornadoes stayed north so we did not have to deal with those.  Two cars that had passed us at speed did end up in the ditch (KARMA!) and there was considerable standing water/flooding around the road.  We decided that we needed a dose of nature so headed to the Palo Duro State Park and obtained a space in the primitive camping area for two nights. The landscape around Palo Duro is a bit flat:

But then the canyon opens up: 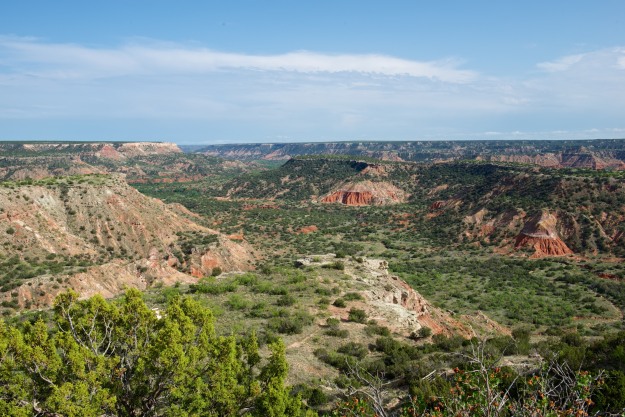 Blue is getting much better at going outside on his leash and he enjoyed the smells of the campsite.  We had several wild turkeys near us, preening, fighting and just plain eating.  Mating season perhaps?  We also heard coyotes fairly close by, both in the evening and during the night.  The next day dawned decidedly “misty and moisty” so we headed out of the park and went to Canyon where there was a well recommended museum to see and a coffee shop to enjoy.

Both turned out to be excellent choices.  We sipped cappuccino and checked on  our lunch options, before heading to the Panhandle Plains Historic Museum at West Texas A & M University.  The girl at the coffee shop (http://www.palacecoffee.co/canyon/) did warn us that another severe weather front was heading in and indeed it was just starting to rain when we approached the museum and found that we would not fit in the museum reserved parking.  Fred asked a WTAMU policeman for advice and he gave us permission to use one of the university permit only parking lots.  He even drove us to the front door of the museum as it was raining hard at this point.  Denise’s first ever ride in a police car!

The Museum provided a thorough background to life in the Plains in all its aspects from Aboriginal Indians through Plains Indians to the early Spanish explorers an all those who followed.  It covered local paleontology, the petroleum industry, windmills, water use, dry farming and ranching and included a fully reconstructed pioneer town.  All items were original to the area and each had its origins and ownership displayed.  Great display of old cars as well, some with historic pictures with their owners. Definitely recommended. (http://www.panhandleplains.org/pages/home.asp)

For lunch we treated ourselves to a feast at Pepito’s Used Cars and Restaurant. No cars for sale, but the staff was charming and the food was quite good, all of the flavors being distinct. (No website: http://www.tripadvisor.com/Restaurant_Review-g55580-d2180144-Reviews-Pepito_s_Mexican_Restaurant-Canyon_Texas.html)

The weather had cleared by the time we returned to Palo Duro so we took a short walk. Denise’s ankle is still bothering her, especially on rough surfaces so we could not hike.  We woke the next morning at 5.30 AM to the sounds of sheeting rain, thunder and lightning, again.  It was too loud to sleep, so in the end we gave up, got up and prepared for the road.  By the time we left it was sunny again as the front had passed.

From Canyon, we turned south to Lubbock. Denise is a great Buddy Holly fan so we went to visit the little museum/shrine. Other than having Buddy Holly’s last Strat, (For guitar geeks only: http://www.superoldies.com/buddyholly/guitar.html) the museum is a bit underwhelming. (http://www.mylubbock.us/departmental-websites/departments/buddy-holly-center/home) 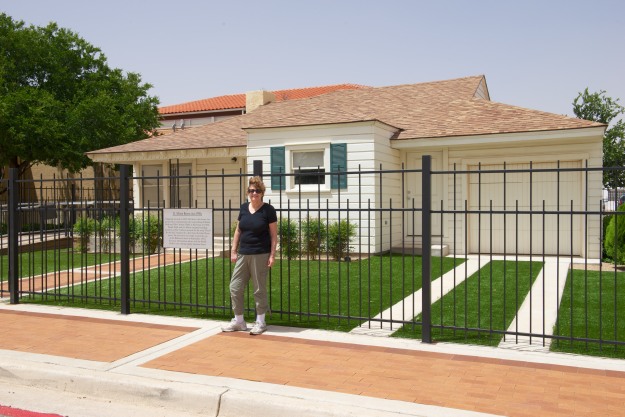 On the other hand, the less known National Ranch Heritage Museum is simply wonderful, much like Weald and Downland Museum in England, or the museum of the American frontier in Staunton, Virginia. (http://www.depts.ttu.edu/ranchhc/) We had a great wander.

An impromptu stop at the Very Large Array, the National Radio Astronomy Observatory, also proved to be well worth it.  The array consists of 3 arms of antenna dishes, totaling 27 dishes, positioned on railway lines so that they can be moved around and extending up to 11 miles from the center.  All data is then fed into a supercomputer and such topics as black holes and galaxies are studied by astronomers all around the world.  The self guided tour was most interesting and we were lucky enough to watch some of the dishes being rotated.  (http://www.vla.nrao.edu) You will have seen the Very Large Array as a backdrop in several movies, including, “2010”, “Contact”, and “Independence Day”. For us it made a great backdrop for lunch.

2 thoughts on “And Onwards to New Mexico”