Having been warned that we might be asked to surrender previously purchased fruits at the California state line, Denise dutifully made applesauce from our eating apples and as a result we successfully crossed into California without fuss.  We had no plants to declare, no firewood, and not much of anything else.  We had decided to spend a little time in Gold Country or Eldorado County, home of much gold rush history and full of quiet backroads, so we headed towards the Sonora Pass.

We started out by taking Route 108 across the Sierra Nevada. The views were spectacular and it was a most pleasant drive albeit with 26% grades! If you zoom in and look to the left of the image, you can see the Marine Corps mountain warfare center. 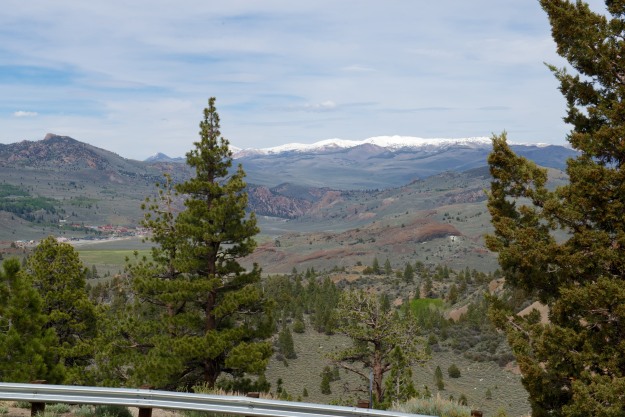 As the road was sporty it was packed with motorcycles and expensive sports cars,  Lamborghinis and Maseratis for example, were seen within a few minutes of each other.  We stopped counting Porsches!   We looked at several Forestry campsites which were unpleasantly full and were just beginning to despair when we stopped at Boulder Flats.  Almost empty when we arrived, we ended up as the only campers overnighting; a private campsite with a number of boulders and enormous trees. 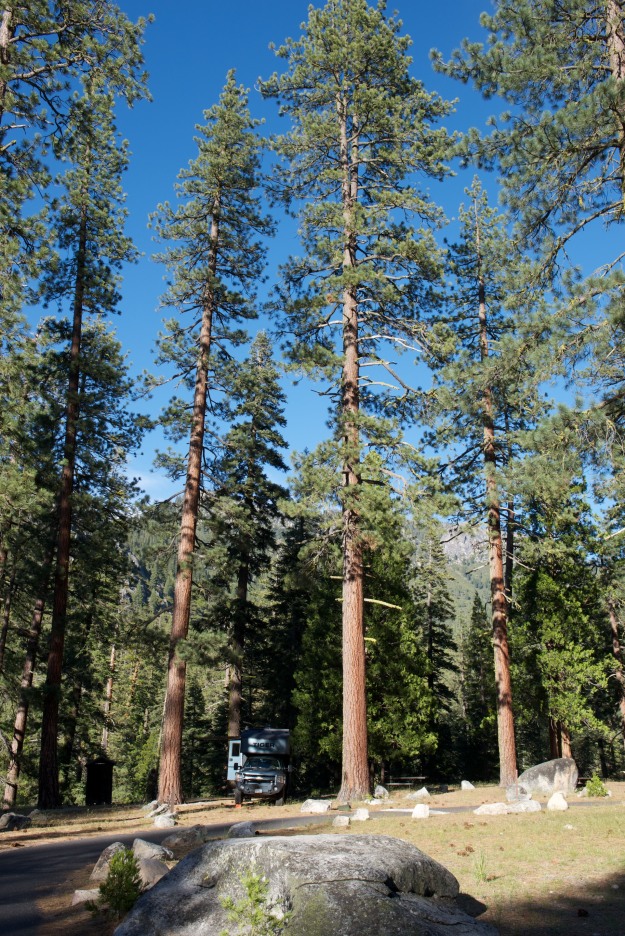 The next morning our first stop was at the Columbia State Historic Park, near Sonora.  An authentic gold rush town, it was greatly reduced in population after the rush ended but never actually became a ghost town.  Thus it was a prime candidate for renovation and life as a state historic park.  (http://www.parks.ca.gov/?page_id=5520 The usual variety of mid eighteenth century buildings were filled with a wide range of authentic items for view and less authentic ones for sale.  There were lots of costumed interpreters and in fact one of the choice views of the day was a costumed interpreter using the ATM on the side of “ye olde banke”.  We had a great time riding the stagecoach and indeed got held up by a masked bandit!  But it was most interesting to ride behind the four horses as they pulled the coach up and down grades.  It felt very authentic.  We enjoyed a long chat with the driver, while waiting for the next ride to begin.  Purely by chance, we were there during the “Diggins” weekend, a weekend when the tent camp which had existed outside town during the gold rush, is recreated.  We paid our entry fee and wandered through, admiring the men practicing their rifle fire, others prospecting with pickaxes and still more sluicing to find gold.  All the other services, dentists, lawyers and doctors for example, each had their tent.  It was our first day in the eighties since leaving Florida so we retired to an air conditioned restaurant in the historic town for lunch. 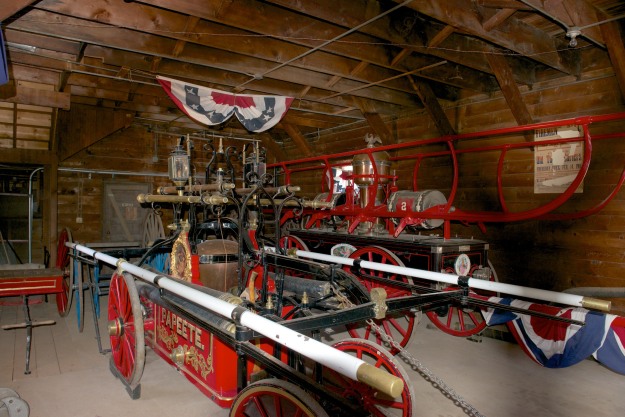 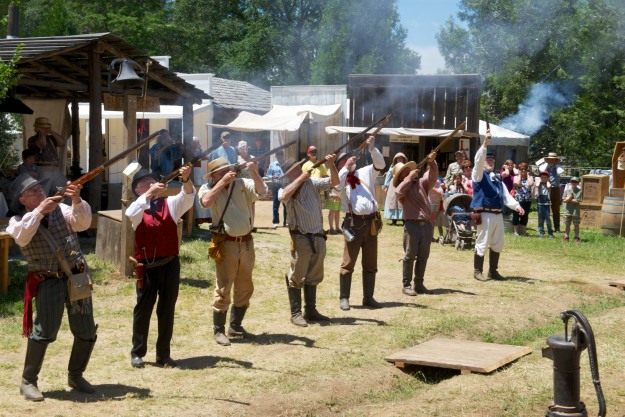 Our next stop was the Calaveras Big Tree Park, so Denise could do her tree hugging.  Home to two groves of giant sequoia, we walked the trail to one grove, admiring the huge trees and sad to see the damage caused by tourism during the 1880’s when the trees were first discovered and promoted.  Two large trees are dead or dying because of losing bark or being hollowed out.  We spent the night in the campsite there, surrounded by younger and smaller sequoia and pine, a beautiful spot.

Denise posed on the stump of the “Discovery Tree.” This is the tree that first confirmed the existence of the giant Sequoias, and so, naturally, it was abused and finally felled. The picture gives at least some idea of the size of this mammoth tree.

It is almost impossible to capture the scale of these tremendous trees. (So Fred gave up trying; you will simply have to visit for yourself.)

We paid a visit to the Indian Grinding Rock State Historic Park and enjoyed the museum of Indian life.  There were a few bark houses and the ceremonial round house was being rebuilt.  A short trail around the park did allow for us to stretch our legs.

The site was most unusual, literally thousands of holes worn into the rock.

Then, as we moved into the winery country, we  decided it was time for a wine tasting.  We quickly learned one basic fact and that is that most wineries are not open on Mondays.  In fact, if you plan to visit the smaller wineries in any of the wine areas, you should plan on going on Friday, Saturday or Sunday.  We researched our Harvest Host listing and found one that looked quite close that was open on a Monday.  So, off we went after putting the address into the GPS.  We drove and we drove down narrow country roads which twisted and turned over hills and down dales (as they say in the UK).  Sometimes the road was so narrow there was no line down the middle and there were appropriate pull off spaces to pass another vehicle.  Practice for UK (especially Devon) country roads!  We did meet the propane gas truck, though fortunately not in the worst part!  The 18 miles probably took us two hours to drive, but we saw some lovely scenery, and finally found our winery, DK Cellars, sitting on top of a mountain with a lovely view.  The owner was there, so we had a great tasting, great discussions, and bought three bottles of wine.  And of course we set ourselves up and spent the night. (http://dkcellars.com)

1 thought on “There’s Gold in them thar hills …”