Why does one go to Petra? Simply put, it is one of the more unique historic sites on earth and near the top of anyone’s bucket list. The Wikipedia has lots of background: https://en.wikipedia.org/wiki/Petra

In Fred’s case, it was another chance to go home. Back in the day, the road looked like this:

The old highway to Petra.

This translates to a lot of grinding in low range! 4×4 geeks may be interested to know that the trip was made with a Land Rover and a Jeep Station Wagon. Today there are excellent paved roads, complete with travel centers.

We had booked a room at the Movenpick Hotel, which is right at the gate to the Petra ruins, which proved to be an excellent idea. The hotel was lovely and we checked in thinking that we had picked well.

Beautiful lamp in the hotel lobby.

As a point of reference, back in the ’50’s one stayed in the ruins themselves, either in caves or tents.

Fred at Petra in 1957 or 58. Visitors stayed in tents (on left) or in the caves at the back of the picture.

The accommodations were a bit more Spartan, but as we discovered, you were a LOT closer to what you wanted to see.

We then went off to look for soap powder and drinking water as hotels provide a small bottle per person in each room but it was hot and dry and we were in need of water to both drink and carry with us on our adventures. We had success and returned to our room to wash some of our dirty clothes and hang them on the line over the bathtub to dry. Then we wandered over to the main ticket office for the Petra ruins for a general reconnaissance as we had been told it was necessary to show a passport and we wanted to check this. We had considered signing up for a “Petra by Night” visit but had not been sure. However, we discovered that we had only one chance to see Petra at night and that was the same evening. So we signed up quickly and headed back to the hotel for an early dinner at the evening buffet. This proved to be amazingly good, especially the excellent Jordanian dish that we both enjoyed. They even had lots of vegetables!

The Treasury by Night

We were back in the courtyard by 7.30 pm to head off towards our first glimpse of Petra. And what a glimpse! The Treasury is a 40 minute walk from the entrance, through a more open section and then through the famous Siq, a 1.2 Km canyon and the way was lit by candles which gave a romantic atmosphere but made it hard to see the way over the rough stones. 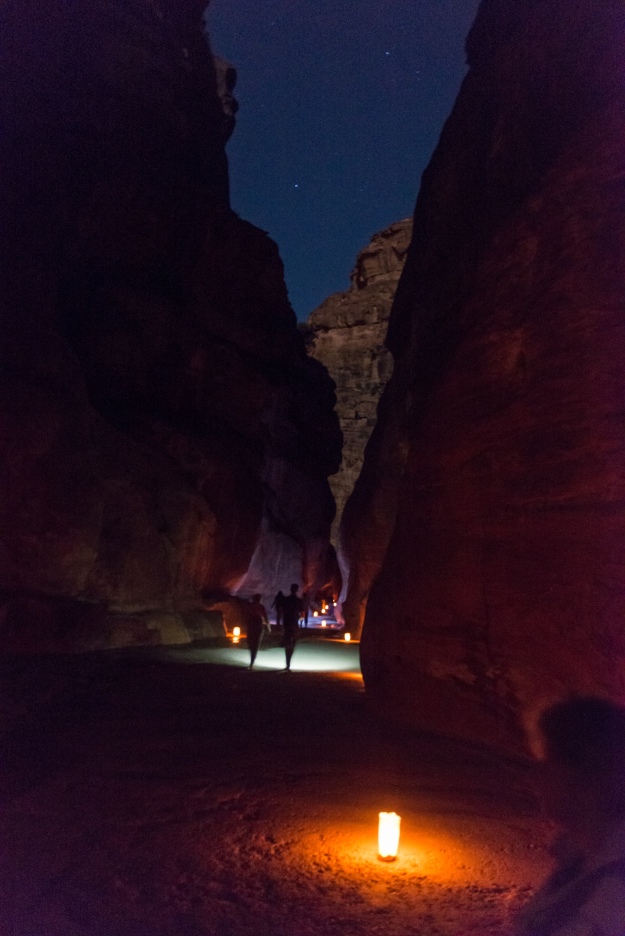 The Siq by starlight.

But we made it in one piece, ankles intact, and we took our place on the mats and watched the different color lights playing on the front of the Treasury.

Treasury by moon and candle light.

One local performer played a flute and another played a rehbab. A bit touristic, perhaps, but both were very evocative. At the end of the performance, we walked back to our hotel.

We decided that our goal for the first full day at Petra was the Monastery (El Deir), a fairly steep climb. So, we bought our tickets at about 8.30 am and headed off to the ruins. The first part was an easy stroll down the hill from the down of Wadi Musa (Valley of Moses), where the hotels are located, to the city of Petra itself.

All of our rambles start at our hotel, next to the visitor center on the right of the map and then continue down through the Siq. The map is not to scale, but as you can see, it is a (long) hike to get anywhere! This leads to a thriving business of carriage, donkey, horse, and camel rides.

It was interesting to see the early part of the walk, which had been invisible the night before, and where there were three  monuments known as the Djinn (A djinn is a spirit, the origin of the word “genie.”) blocks as well as the Obelisk tomb.

We then came to the mouth of the Siq. There had been an arch here. 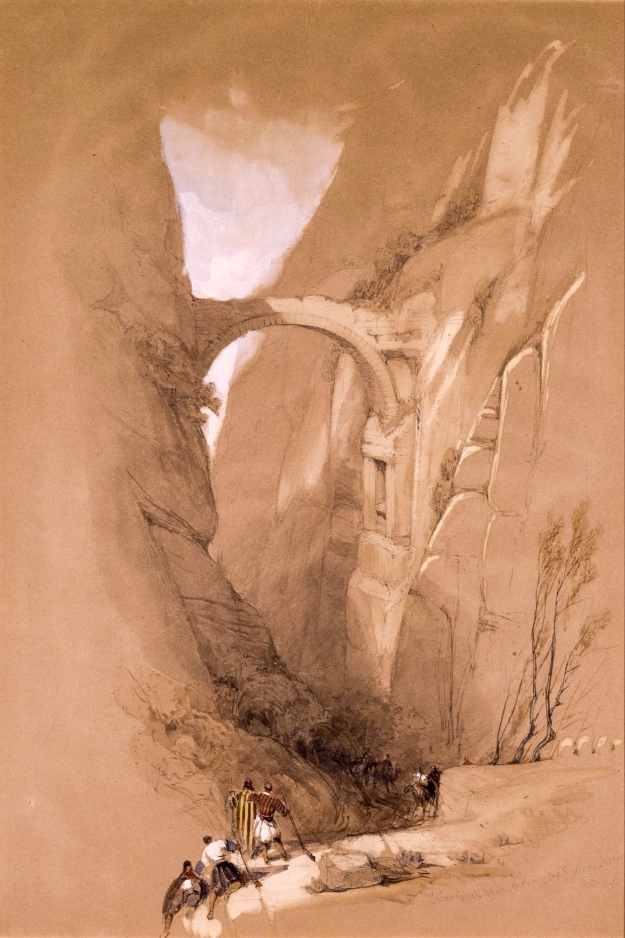 The arch has since collapsed. 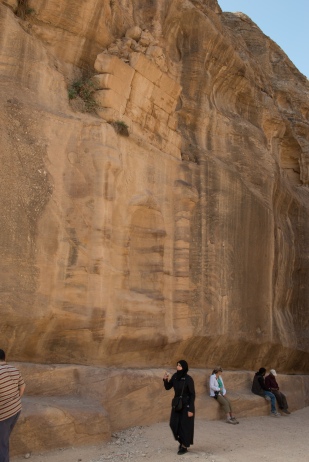 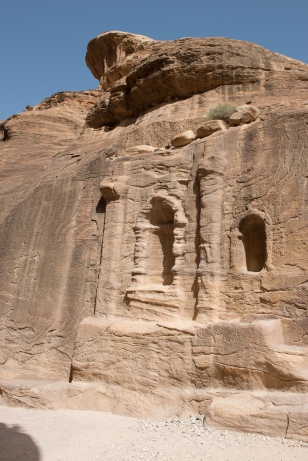 We continued on through the Siq and Denise takes credit for our best version of the obligatory classic shot: 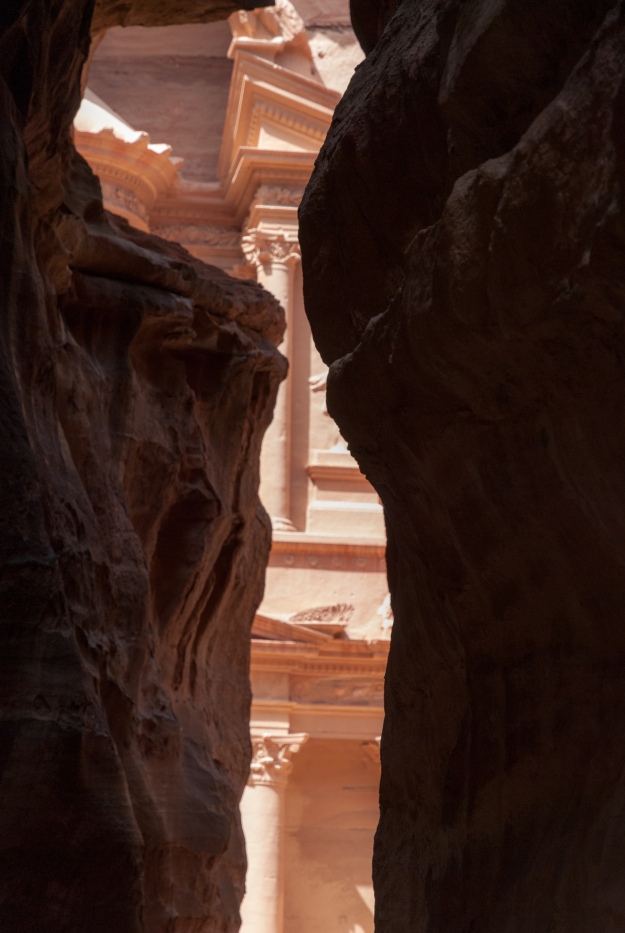 The Treasury through the Siq. A classic shot.

Fred was fascinated by the changes that had occurred since he had last visited.

Tourists at the Treasury.

Perhaps the greatest changes are that:

— One of the columns (third on the left) has been restored, and,

— The space in front of the Treasury has been excavated.

In the old days, even up until the 1950’s, the ground was much higher and most of the outer parts of the Treasury were deep underground

The broken column is clearly shown. Note the river and the level of the ground. At least twenty feet of dirt and spoil has been excavated and they have found rooms in front of the facade.

Two views of the center of the facade. My camera gear and skills have improved a bit over the years.

The Urn atop the Treasury. The Bedu used to shoot at it as legend had it that it contained the treasure of the Pharaoh.

Picture Fred took of the Treasury, complete with light leakage. If you look very closely, you will note that the third pillar on the left is missing. It was re-erected sometime after the 1950’s. 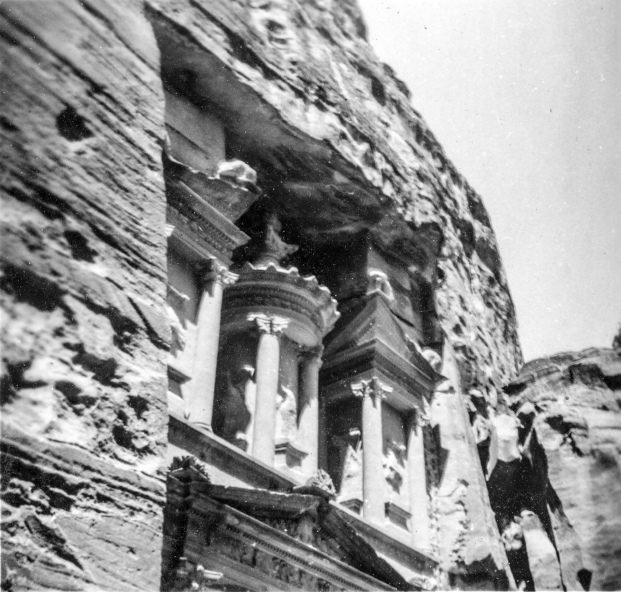 Another shot of the Treasury.

Many complain of the crowds, but, in reality, the people watching was fun. And the steady flow of tourists certainly helps the local economy.

Everyone wants a selfie with their camel.

We then made our way down the main street or Street of Facades towards the steps for the Monastery.

Denise decided to take a donkey part of the way, though Fred climbed the entire distance. Denise was impressed. 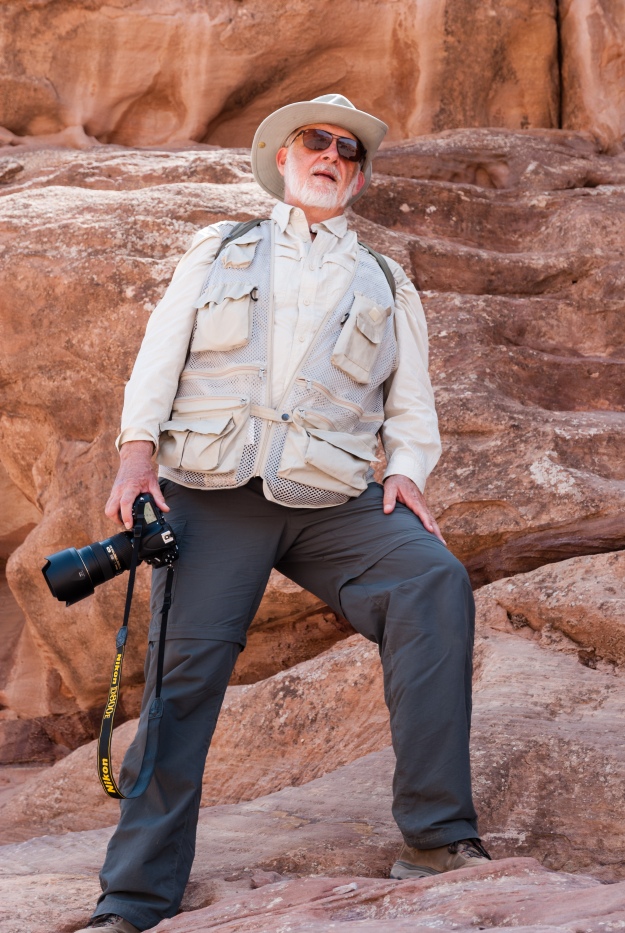 Fred, just as tired as he looks!

The climb is long, but offers amazing views back down the valley.

The main city center is down there on the valley floor with a wall of tombs in the background.

Stairway to Heaven. (Or at least to the Monastery.)

Flowstone of the side of a mountain. Flowstone is usually found in caves.

Towards the top we stopped for a lemon with mint from a really pleasant vendor with a lovely shady divan where we could rest for a while. It was very hot and sunny and we carried two bottles of water but were consuming them fast. And then, we turned the corner. 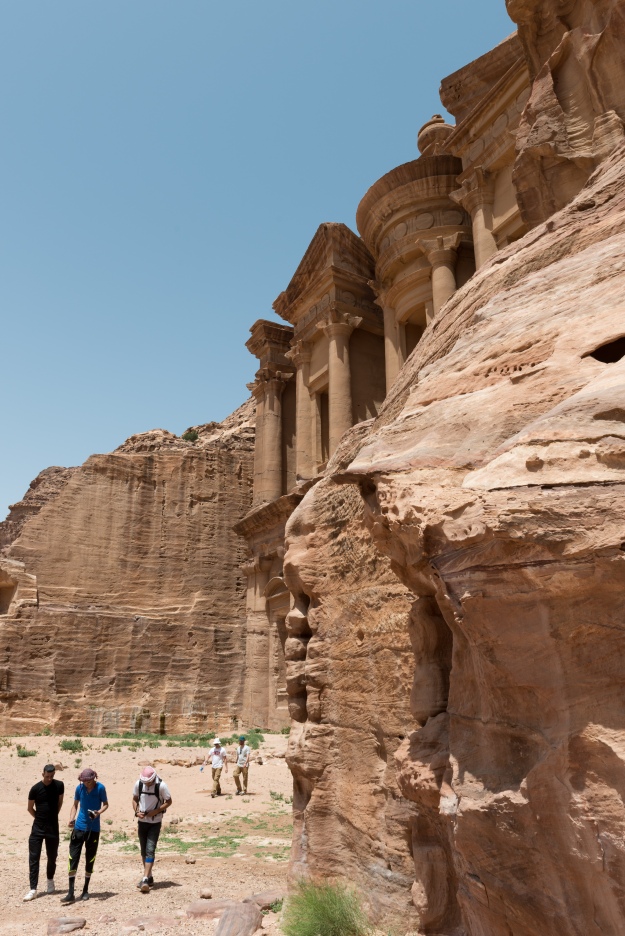 Your first view of the Monastery as the trail comes around the corner.

The Monastery has long been one of the classics of Petra. The painting is by David Roberts: https://en.wikipedia.org/wiki/David_Roberts_(painter) 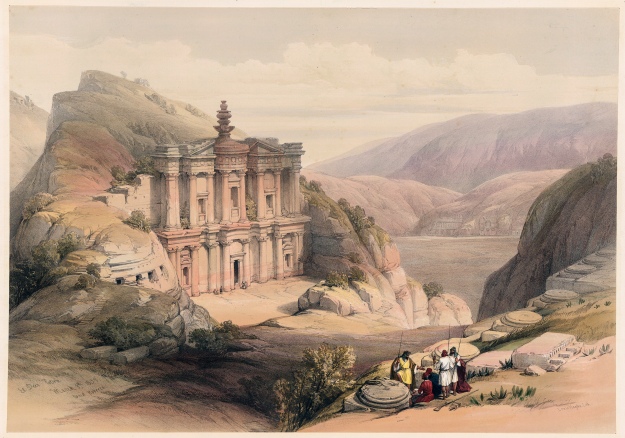 Comparing the two images, the  realism and accuracy of some of these old images is simply amazing. As always, expand the images for more detail.

We paused for photos and to admire the wildlife. 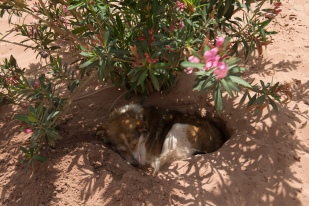 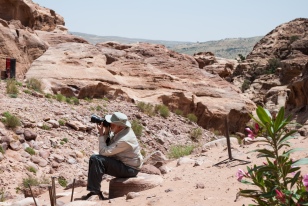 Once at the top, Fred climbed even higher to a lookout where a man was playing an oud. 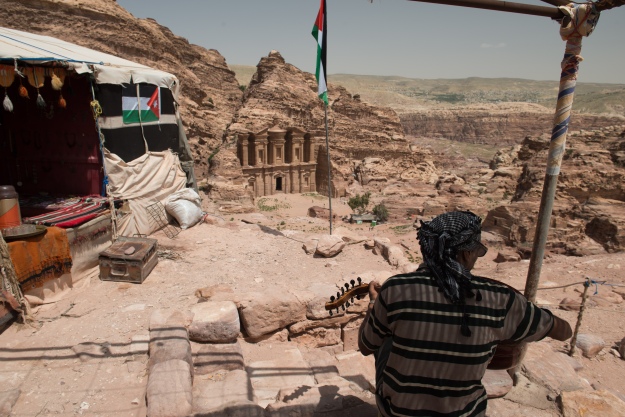 This view would inspire anyone to practice their scales!

Denise remained gazing at the Monastery frontage and ate an apple, which was to be lunch for the day. 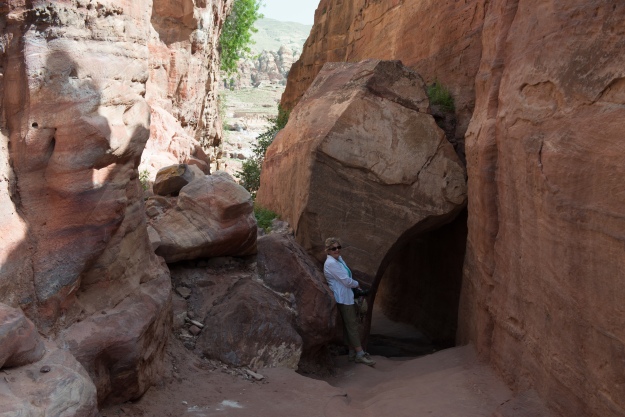 Fallen rock tunnel on the trail to the Monastery.

We then visited the Grand Temple. This temple is actually larger than the Temple of Artemis at Jerash, but at Petra, most of the attention is focussed on the rock carved structures. It is easy to forget, that back in the day, the free standing structures were even larger. Sadly, most were damaged or destroyed by an earthquake. 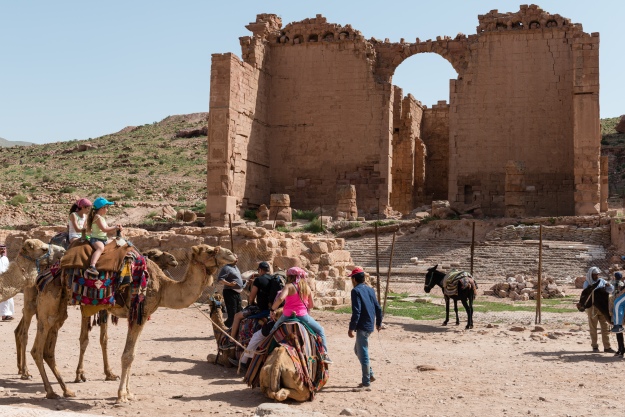 We continued down the Street of Facades in front of the tombs and found a vendor with shade and ice-cream. So we stopped for a mint and lemon drink and an ice-cream (you may be noting a pattern here!).

We were tired and decided to return to the Treasury on camelback. It was a short ride, about 10 minutes, but it was something that Denise had wanted to do. However, Denise is delighted to say that having done it, she will not do it again as her back did not enjoy it as much as she did! Fred enjoyed it and was only sorry the ride was so short.

Denise finishing her camel ride. (Beats walking at the end of a long day.)

Heading into the lower Siq.

Then it was time for the hike back to the hotel. We made it back to the hotel by 6.00 pm, showered and staggered down to the buffet again. The Jordanian dish was different on this evening, but still excellent, and we were too tired to even walk to an outside restaurant. We were exceedingly glad that we had picked the Movenpick Hotel right at the gate to the ruins; ten hours, and 800 steps up,  is a long day!