So, we set off for Canada and stopped for a homemade, pot luck brunch to eat up as much open food as possible in case Canadian Customs wanted items destroyed.  Well, the border was absolutely deserted and we passed through with no questions of food items in the camper or pets on board.  Like true tourists, our first stop was the information office just over the border.  They were exceedingly helpful and told us where the supermarket was and suggested we visit St. Andrews by the Sea, a nearby resort town. We followed their advice and spent two nights there, camping right on the ocean.  (http://www.kiwanisoceanfrontcamping.com)

They had live music there the first night and we listened until we got too depressed by the country music they were playing.  None of the songs ever end happily!  So we went back to the 917 and fixed dinner. That did end happily.

The next day we walked the small town and booked a whale watching cruise on a tall ship.  (http://jollybreeze.com).  The sun went in before we boarded and it was a chilly afternoon on board but a cup of hot chocolate followed later by homemade pea soup, warmed us up. we saw a couple of Minke whales, plus a selection of basking seals and several porpoises. Minkes are not exceptionally large whales, but they do meet the test of having-seen-a-whale. It was a well run and fun cruise. Fred spent much of the voyage chatting with the owner’s father, who was crewing. The Jolly Breeze was built in New Zealand from the plans of an English pilot boat. 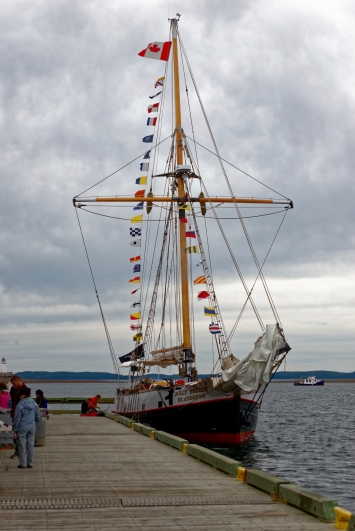 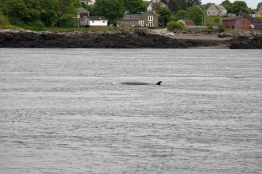 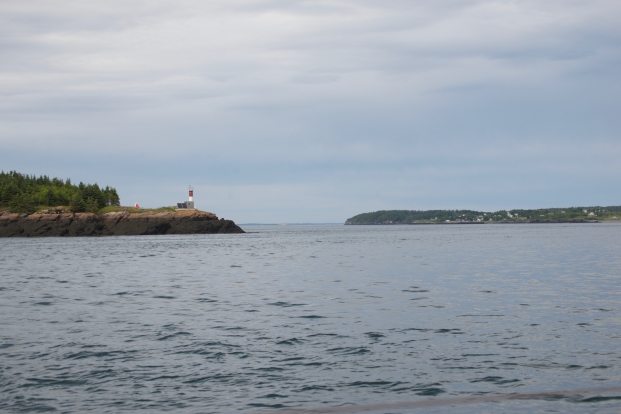 Denise has noted and enjoyed a mass of lupins wherever we are both in New England and Maine and now in New Brunswick.  It brings back memories of reading the children’s tale “Miss Rumphius” to our daughter when she was small.  She even bought a Miss Rumphius t-shirt with a scene from the book.  Lupins do not grow wild in Virginia!

Lupins were to become a constant theme during our time in Canada, flowering along almost every road.

We decided to visit the Museum of New Brunswick in St. John’s so we went to the campground in Rockwood Park. (http://rockwoodparkcampground.com) A lovely spot; a huge park only about thirty minutes walk from the old downtown. We headed into town on foot, enjoyed the museum and a cup of coffee in town before heading back.

Most US history books imply that there was general rejoicing at the end of the American Revolution with all of the colonialists ecstatic at winning their freedom. In fact, the country was deeply split with at least 100,000 loyalists fleeing to Canada. St. John was founded as a loyalist refuge, growing from a tent camp to a city in only one year. There are some interesting aspects of the loyalists that are overlooked in most US history courses. They include:

— Black Nova Scotians. The ships carrying loyalist refugees to Canada had an odd admixture of black passengers – free blacks who had gained their freedom by enlisting in the Royal Army, and, on some of the same ships, enslaved blacks being taken by their loyalist owners to Canada.

— Militias. It is an article of faith of (too many) Americans that we won our independence with home brew militias that somehow defeated the regulars of the Royal Army. The truth is very different – rebel militias were notoriously unreliable, prone to desert at harvest time and unable to withstand the fire of British regulars. Washington depended on the Continental regulars and thousands of French soldiers to win our independence. (A tip of the hat to Benjamin Franklin, John Adams, and our other first diplomats for negotiating with the French for ships and troops and with the Dutch for recognition and money.) In fact, there were more French troops at the battle of Yorktown that Cornwallis was not entirely out of order wanting to surrender to the French. What all of this have to do with loyalists? Only that there were loyalist militias as well as patriot militias and, with the end of the war, they wanted to escape the United States to avoid retribution.

One of the attractions of downtown St. John is the preserved loyalist house, survivor of innumerable fires and urban development.

We think our round trip was probably close to 4.5 miles with the last part decidedly uphill!  So we stopped by the lake in the park to listen to live music and enjoy a glass of wine before tackling the last hill to the camper.  An enjoyable interlude.

Leaving the next morning, we headed towards the Hopewell Rocks (https://en.wikipedia.org/wiki/Hopewell_Rocks) to discover all about huge tides (up to 46 feet) of the Bay of Fundy.  We checked into the Headquarters Campground of the Fundy National Forest (https://www.pc.gc.ca/en/pn-np/nb/fundy/activ/camping/avantpays-frontcountry/administration-headquarters) and watched the rain fall.  As the afternoon progressed, it began to clear a little so we added layers and raincoats and headed for the Rocks as it was almost low tide.  It was indeed amazing.  We visited all the viewpoints and descended to the beach where we ambled among the shaped rocks  on the sea floor.  Somewhat chilled, we headed back to our campsite for dinner.  We returned in the late morning of the following day and with much better weather, and duly admired the views with high tides, this time in shirt sleeves! The “rocks” themselves resemble nothing so much as the “temple” monoliths of the Capitol Reef in the western US being made of compressed earth with lots of rocks mixed in.

Denise down on the sea bed.

We stopped in Moncton to shop and continued just over the border into Nova Scotia. We spent the night at a lovely RV Resort called Loch Lomond https://www.lochlomondrvpark.com). We always like it when campgrounds don’t make us pay for the hookups we don’t use! The next morning we headed for Cape Breton. Picking a side road at random to stop for lunch, we ended up at the Barney’s River school museum. It doesn’t open until July, but we were able to have lunch safely off the road. (https://www.novascotia.com/see-do/attractions/barneys-river-station-school-museum/1455)