We left Casper heading north-west en route to Thermopolis.  On the way, we stopped for lunch, quite by accident, at a pull off at Hell’s Half Acre!  It looks over a small, isolated, and deeply eroded valley full of painted desert colors and fanciful shapes. It used to have a restaurant, but now there are only slabs at the overlook. Hell’s Half Acre has been used in various movies, most famously “Starship Troopers” where it became Klendathau, the bug planet! 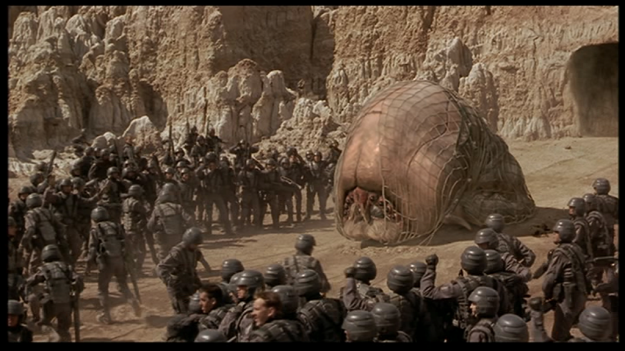 As lunch spots go, it was quite spectacular! And we were not bothered by bugs, big or small. Movie fans take note. Like the Alabama Hills, Hell’s Half Acre is an interesting study in how a tiny space can appear huge when you carefully control the camera angles. Hell’s Half Acre was used for the scenes of the capture of the Brain Bug. Other scenes were shot in South Dakota and California.

Thermopolis sounds rather Greek but is actually a pleasant Wyoming town which is the site of multiple hot springs.  (http://thermopolis.com) We stopped at the Hot Springs State Park but decided not to soak there with hundreds of our nearest and dearest acquaintances. It was a Saturday afternoon and the places were all heaving.  So we headed for the Fountain of Youth campground which had its own pools for soaking. It turned out to be a rather ordinary commercial campground, but has three large hot spring pools.  (https://camphotsprings.com) Denise soaked a while in the coolest of the three, which was plenty warm enough for her!  Fred did get into the middle pool for a short while and he said it was hot!  The third pool was too hot to enter, but flowed into the second, which flowed into the first, which flowed out via a channel.  All quite ingenious.  We both enjoyed it all more than we expected to!  We should note that no photos of the soaking experience were taken!

And while in Cody we spent a day at the Buffalo Bill Center of the West, which was a most interesting collection of museums, connected to the Smithsonian in DC.  (https://centerofthewest.org)  Sounds a bit like a tourist trap, but it is actually a very serious set of museums. All were excellently done, especially the Draper Museum of Natural History, which gave insights into local flora and fauna.  We also enjoyed the Museum of William Cody (Buffalo Bill) and the Plains Indian Gallery.  Denise enjoyed the Gallery of Western Art with paintings both historic and modern.  The Firearms Museum was under renovation.  They also have a selection of raptors and we enjoyed meeting a very well behaved screech owl! These are all birds that have been injured and cannot survive on their own in the wild.

Our next adventure was a visit to the town of Kirwin, a ghost mining town in the mountains about 60 miles away.  (https://www.wyohistory.org/encyclopedia/kirwin-wyoming)  We were initially worried by all of the “we’re-all-going-to-die” posts on the Internet, especially as the 917 is a bit bigger than a Jeep, but after a lifetime in Africa and especially in the Andes, we decided to give it a try. The first part was paved to Meeteetse and a bit beyond.  Then the road was a well graded gravel one. 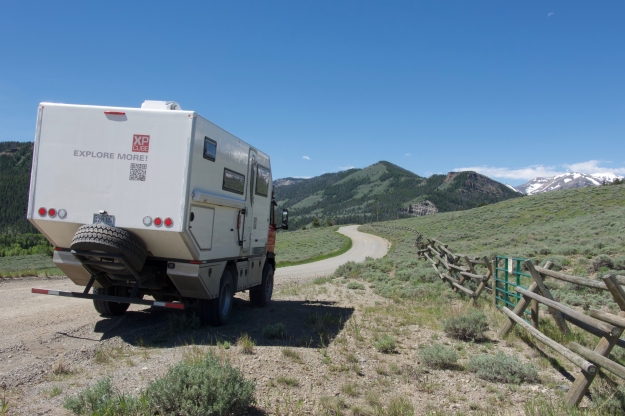 Finally, as we started to climb into the mountains through the Shoshone National Forest, the road was rockier and rougher.  It also included four river crossings, one of these involved driving down the river for 100 yards or so!  This reminded us of the times we hiked to view the forest elephants in Bangui which also involved much time walking through a river!  We were concerned about the water levels in the river as there had been so much rain this spring, but the the crossings were made without a problem. 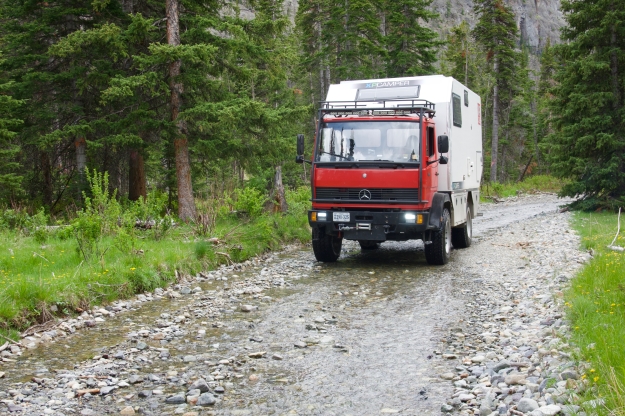 While it is clear that the road could get interesting in the rain or snow, it turned out to be very easy when dry.

The trail was almost always at least one lane wide.

The mines were long abandoned but some of the buildings remained. 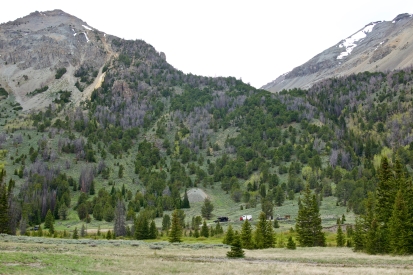 View of Kirwin showing the peaks which were the source of avalanches.

Tar paper weathering off of the old boards

Another mine, back in the woods 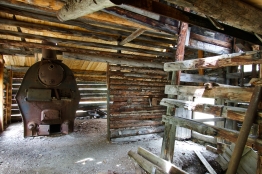 Head gear over the vertical shaft.

While we only met one vehicle on the way in, there was a constant stream of trucks and 4×4 off road buggies coming and going.  The flowers however, were beautiful in the slightly lower altitudes; miniature lupins, purple milk vetch, harebells and possibly Rocky Mountain iris.

Wreck at the bottom.

9,000 feet is high, so we descended a bit and camped at the Brown Mountain Campground run by the Forestry Service. It proved a delightful spot.  We were the only people there and enjoyed seeing a number of pronghorn and mule deer, passing by to feed and drink.  And, the next morning, we finally saw a moose! A young one, but a real, live, moose at last!

Back in Cody, we treated ourselves to a lunch of wood fired pizza at the Trailhead restaurant (http://www.trailheadcodywy.com) and returned to the campground at Buffalo Bill State Park.

We wanted to see the Medicine Wheel, a sacred American Indian site in the Big Horn Mountains, but on our way, we stopped for lunch at the Visitor Center for the Bighorn Canyon National Recreation Area.  (https://www.nps.gov/bica/index.htm) A gentleman we met in the parking lot recommended that we visit the Canyon, chatting as he admired the camper!  So into the Visitor Center we went and saw the movie and then asked for information.  The Bighorn Canyon National Recreation Area stretches into Montana and in fact we ended up camping at the Barry’s Landing campground in Montana.  There are wild horses, bighorn sheep and various other deer wandering in certain areas, though in our particular case the bighorn sheep had gone to higher altitudes as it was hot.  We stopped at the Devil Canyon Overlook for spectacular views of the Bighorn Canyon and Lake before camping.

While we admired the view, the deer admired us. 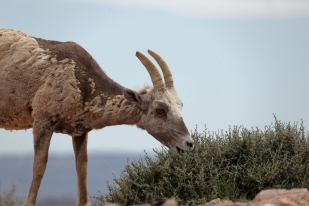 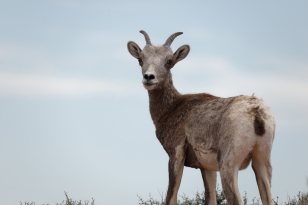 We also visited a ghost ranch  owned by the “cattle queens”, Caroline Lockhart, also an author and journalist.  The site was green and lovely but one could only imagine how cold it is in the winter!

Trail towards the Ranch

Spring House. The house was built over the spring and the water flows out the front door. Used as a form of refrigerator. 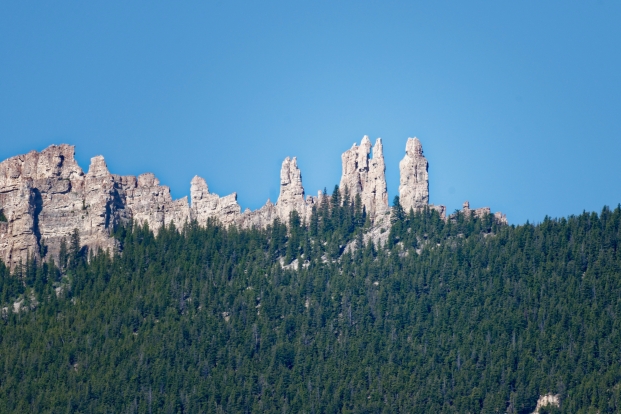 Rocks on the top of a nearby mountain.

Descending the road we stopped to admire the tipi circles and mustangs.

The valley has hundreds of these stone circles. The stones were used to anchor the bases of tipis.

Back on route to the Medicine Wheel, we tackled one of the most spectacular roads we have ever driven, Wyoming 14 Alt.  The road closes in the winter and we can certainly see why.  (http://www.whp.dot.state.wy.us/home/ports/mountain_road_information.html) It climbs about 4,000 feet in about 5 miles at a 10 percent grade and would be just as bad going down as going up. 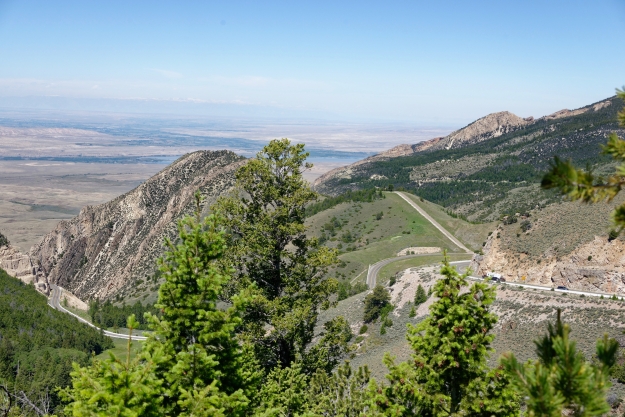 We did rather crawl at times, but we made it and enjoyed the spectacular views some of which are over 200 miles. Much has been written about the Moki Dugway, but we think that 14A matches it.

The Medicine Wheel was well worth the visit.  (https://en.wikipedia.org/wiki/Medicine_Wheel/Medicine_Mountain_National_Historic_Landmark) The Forest Service had only just opened it for the season and there were still some snow banks covering the trail but the views were spectacular.  The Medicine Wheel is sacred to several American Indian tribes and we saw various offerings and prayer bundles at different spots.  Interestingly, since no one really knows who built the circle or when, it is considered a universal site and thus, unlike Devil’s Tower, there are no restrictions on photography of offerings, etc. The roundtrip path is only about three miles but at 10,000 feet of altitude and clambering through the snowbanks, we felt it.

The trail rises up to the wheel.

How long have these rocks been arranged like this? Why? And by whom?

The view is incredible. 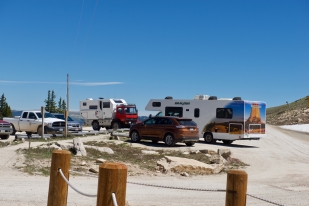 The road in is narrow and unpaved, but the parking lot was full.

We then headed for a Forest Service campground back on Rte 14A where we found a lovely site and settled in for the night.

The next morning we headed out heading for Montana and to Denise’s delight there was a moose on duty, browsing at the entrance to the campground.  Denise was happy! 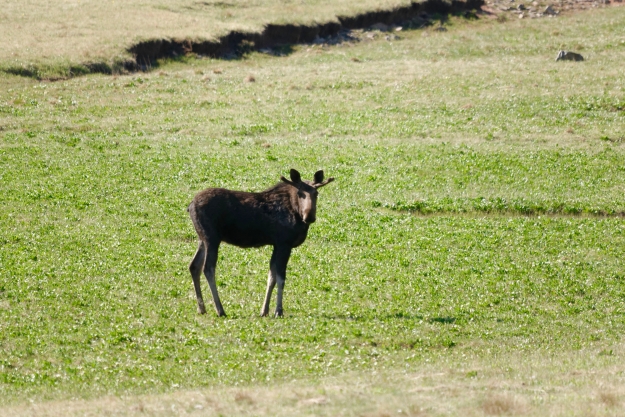 A moose at last!