We then started a series of visits to sites of great violence, volcanic violence, that is, beginning with Crater Lake.  We were still early in the season and part of the East Rim was closed as it was still under snow and we were too early for any boat rides on the lake or tours of the rim road, as June 26 is the start up date for those.  But after educating ourselves at the Visitor Center, we began visiting the various viewpoints, walking along the rim.  It is a most beautiful and awe inspiring sight and the color of the lake is a deep blue. We were interested to see a considerable amount of algae bloom in one section of the lake, presumably due to the light snowfall of the winter.  A mere 16 feet instead of the more usual 45 feet!

As most know, Crater Lake is a caldera left after the explosion of Mount Mazama, just over 7,000 years ago. Interestingly enough, the traditions of the native Americans who live in the area are very accurate in describing the eruption. Native American artifacts, found under the Mazama ash, confirm that they were living in the area prior to the eruption. The Mazama eruption is unusual in that subsequent eruptions sealed the bottom of the crater and thus trapped the rain and snow melt water. There are no rivers that flow either in or out of the lake and thus the water is of extreme purity. There are, of course, many such caldera in the United States, Mount Saint Helens being one of the most recent and Yellowstone being the largest. Fred first discovered a volcanic caldera at Gunung Bromo in east Java and has been fascinated by them ever since. (https://en.wikipedia.org/wiki/Mount_Bromo) A visit to Crater Lake was a lifetime dream. We drove the West Rim road and then left, heading north to Bend, Oregon, where we had a great pizza for dinner! 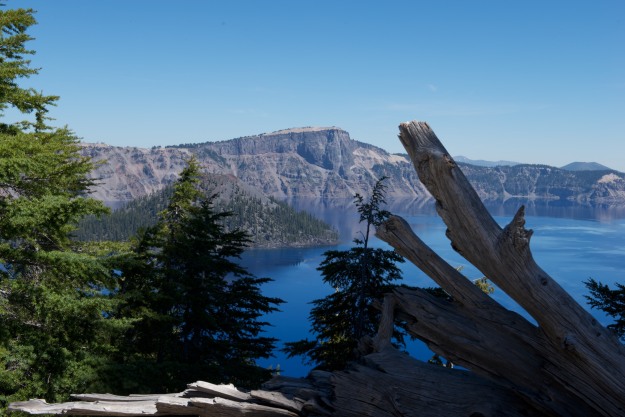 Ants chewing their way through a stump. (Click twice to expand.) 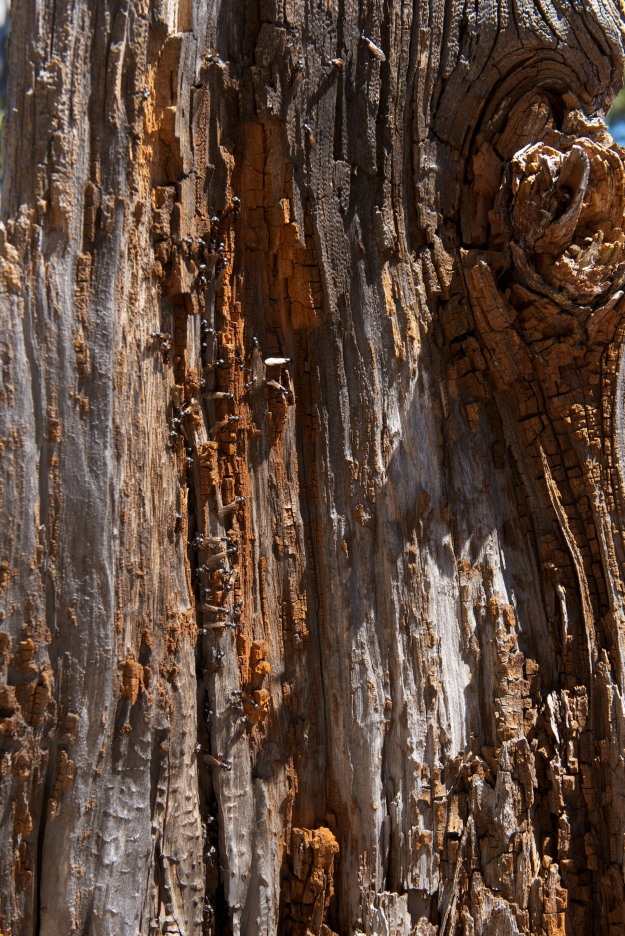 Wizard Island is a cinder cone that grew up through the lake. 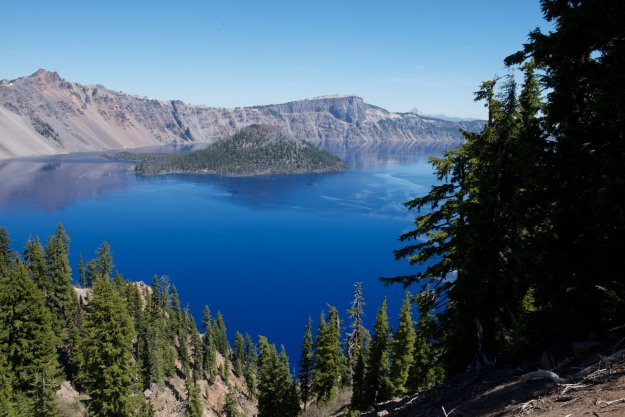 While near Bend we visited the High Desert Museum, a fascinating spot with historical displays and some native animals (most of whom had been wounded or were unable to be released for some reason).  (http://www.highdesertmuseum.org) The exhibit on the Oregon Trail was fascinating with a wide selection of photos and clothing as well as artifacts.  The Indian exhibit was interesting but we most enjoyed the river otters.  We had not seen river otters since we lived in Coral Springs and it was such fun to see them swimming and racing around.  Fred also liked the raccoon and the bobcat.

Heading back across the Cascade Mountains we drove through beautiful slopes of pine trees.  The scenery in this part of the United States is amazing; it keeps getting better and better.  But the temperature kept rising and it was getting hotter and hotter.  Passing a Ranger Station, it read 98F!  We decided that a night of air conditioning was in order, so we stopped at an RV Park on the Mackenzie River.  It was not an evening for a primitive site; Denise demanded her air conditioning!   It proved to be a delightful spot and we were given a site right on the river, which was quite loud at that point due to rapids, and under shade trees.  We spent a delightful evening watching rafters shoot by and then slept well in our cool Tiger.

Tiger Adventure Vehicles source their solar equipment from a company named AM Solar, in Springfield, Oregon. We took advantage of the opportunity to stop in and see their facility and to look at their new line of Lithium batteries. We nearly missed the shop as their sign is tiny, but the grounds are a glorious garden overlooking a stream. Fred had a great conversation with one the the technicians and admired the mockup of their new batteries. There are many tempting advantages to Lithium batteries, but the existing batteries on Ndeke Luka work so well and have the advantage of being fully paid for. Also, the demand for AM Solar’s new Lithium batteries is so great that they are backlogged several months on installations. There may be other companies in the business that can be trusted to sell you good solar equipment and more importantly, instal it correctly, but AM Solar is the one we always recommend. (http://amsolar.com)

We camped at the Kramer winery, another Harvest Host member, not too far from Portland, Oregon. (http://www.kramervineyards.com) We had a wonderful evening chatting with staff and a couple of intrepid bicyclists who had found their way up the hill, and getting to know Cosmo, the black lab cross, who lives there.  Ignoring Cosmo, Norlina Bleu enjoyed a wild, off leash ramble and went to bed a happy cat. Another beautiful spot to enjoy and of course, we purchased some more, OK, a lot more, wine! 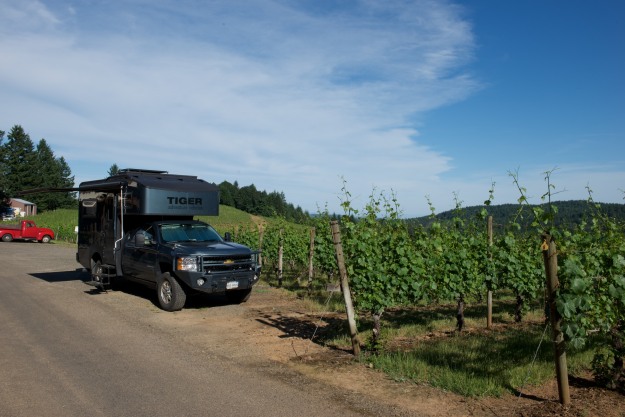 Following our violence theme, we headed next to Mt. St. Helens;  after learning about the actual event and reading some of the poignant stories, we headed up the mountain itself through the blast area to the Johnson Observatory where we took photo after photo and climbed a short trail to get the best views.

First view of the mountain in the distance.

As you get closer, the mountain gets bigger and appears to be surrounded by forests. 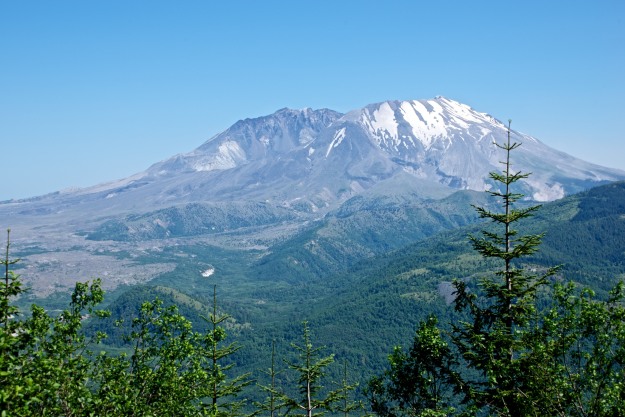 Get closer still, and you notice the vast areas that are still denuded of trees, thirty years later. The new crater is also clearer. 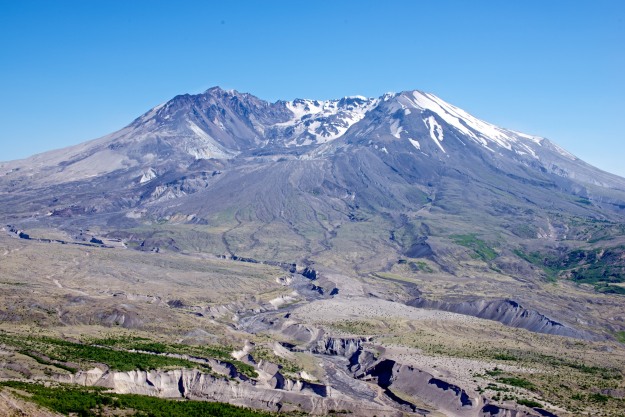 There were riots of wild flowers everywhere.

And lots of destroyed trees.

A telephoto lens provides a view into the crater, where the central lava dome is now over 1,000 feet tall; awaiting the next blast. 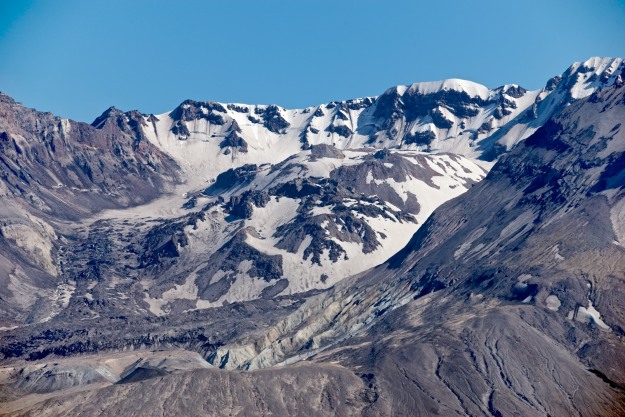 The mountain and the blast area are both amazing, both made a great impression on us. The Johnson Observatory is named for David A. Johnson, who was on the ridge reporting by radio when the volcano erupted. He was never found. (https://en.wikipedia.org/wiki/David_A._Johnston) Fred, who has enjoyed visiting volcanoes for many years, found the visit especially moving and fascinating.

And on to Mount Ranier, Denise’s choice.  (Fred was struck by the fact that, at the Mount Saint Helen’s Visitor Center they noted that Mount Ranier is projected to be the next Cascades volcano to erupt.) We are still enjoying cool, cloudless days with bright sunshine and deep blue skies and we could see the volcano from afar.  We stopped in Morton on the way, for some needed items (fuses, a new sewer hose and a multimeter, the latter being Fred’s birthday gift to himself) and enjoyed a coffee and goodie at a great coffee shop.   The owner of the NAPA auto parts store had to come and inspect the Tiger of course! A quick note on customer service. We had stopped at a Camping World store (where we get a discount) to buy a new sewer hose, but left without buying a thing as we could not get anyone other than the receptionist to spare us the time to explain the different hoses and mounts. The NAPA store may have be a bit more expensive but they got the sale as the owner was so helpful and welcoming. (http://www.whitepages.com/business/eds-morton-auto-parts-napa-morton-wa)

There was some delay on the road due to roadworks, but we made it up to the Visitor Center and found a place to park, not always easy! 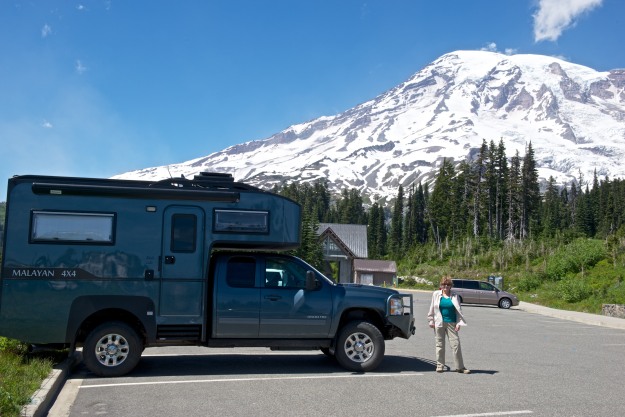 We decided to treat ourselves to lunch in the Lodge, a most attractive log building. Sadly though, we found the food good but not wonderful.  We then walked the trail to the view points for the glacier.  Denise enjoyed the wildflowers, especially the alpine lilies that carpeted the meadows like snow.  In fact, the flowers have been beautiful on this trip, from the mountain meadows to the gardens in California and Oregon, and even fields of blue along the highways in Montana and Wyoming. 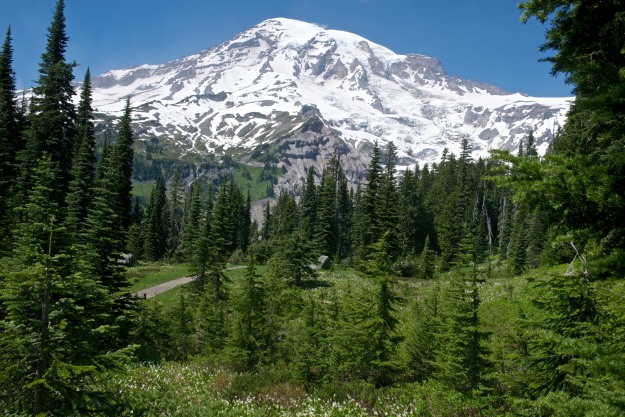 The views over the glacier were well worth the walk and Fred managed to photograph skiers taking advantage of the snow, way up on the glaciers. (Click twice to expand; those tiny dots in the first picture are skiers. Really.)

We stopped at the Narada waterfall on the way out and climbed the path down to the base.  It was quite spectacular with snow melt. 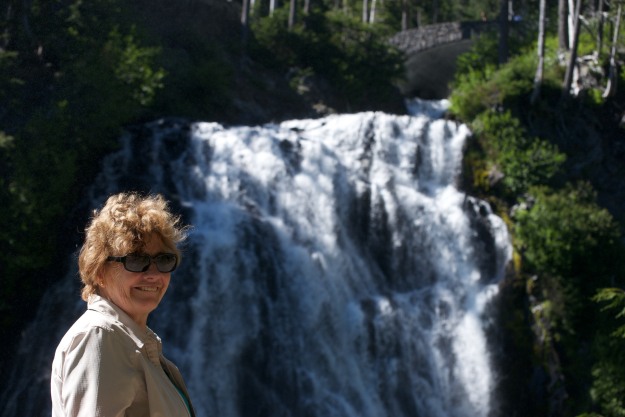 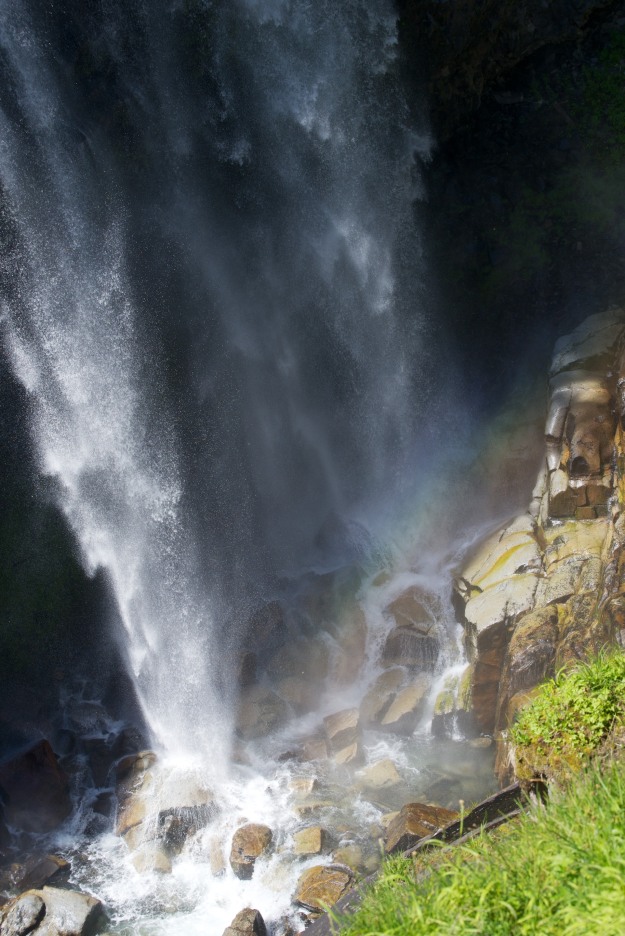 A last view of the mountain as we left the park. 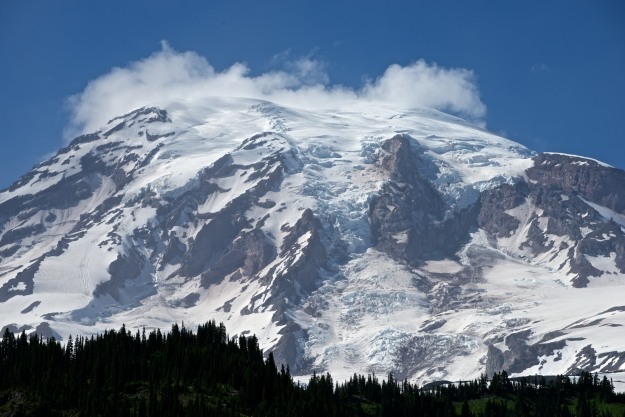 We then took the Steven Canyon Road through the park to the eastern side where we were able to camp in the National Park Service Campground, deep in the woods. Fred noted that the campground had a big warning panel entitled “Safety Precautions for Camping on a Volcano”. Who knew that camping could be so exciting?

As we continued down the road we came to an incredible set of palisades, an ancient lava flow.

Climbing away from Yakima we had one last view of Mount Ranier on the horizon, as we headed towards Coeur d’Alene, Idaho.

They certainly turn the scenery on here.  Arlington is going to look positively staid after all this!