Still on the move, we headed to Idaho to visit some friends from our time in Monrovia, Liberia, rather a number of years ago.  They live just north of Coeur d’Alene and we had a wonderful time catching up, plus seeing enough of the area to know we have to go back!  They were also kind enough to lend us a washing machine and dryer!  Most important! Off again, we were flagged down as we bought some coffee for the road, by people wanting to see the Tiger.  This is really not a vehicle for the introvert!  We end up giving so many camper tours and handing out Tiger Adventure Vehicles cards.  So, a little later than expected, we headed off to visit the Wolf Education and Research Center near Winchester, Idaho.

This Center teaches about wolves in their natural habitat and is trying to enhance the public’s awareness of wolves, as a threatened species and how they interact with their environment.  Not an easy topic.  At the moment, they have two females in a two acre enclosure and a wounded male, who is not on show. We booked a guided tour for 7 P.M. that evening, and went off to find a campsite in the Lake Winchester State Park, ate a snack and returned for our visit, which included a brief introduction, some explanation of various exhibits in the center and then a visit to a spot by the fence where we would (hopefully) see one or both of the wolves. We walked the short distance to said spot and did indeed see the one wolf, who is curious and who regularly checks on visitors.  We saw her a number of times as she walked by to check us out.  She unfortunately did not stay very long on any of her visits. We did not get any photos as she was behind a fence and it was very dark.  But it was fascinating to see her come by and then disappear into the bushes.  Just as we were preparing to leave, after the tour, the other wolf started howling and continued for about 20 minutes.  A wolf had died a couple of weeks before and the howl started as a sad howl, probably mourning the dead wolf, and finishing in a warning, barking howl as dogs answered and the wolf obviously felt threatened by their presence.  It was the most eerie sound we have ever heard;  the male and the other female both answered the howl.  It was amazing.  The non profit group is currently deciding whether to take in more wolves or to move locations to another state to continue their work there.

More wonderful scenery lead us across the Bitterroot Range, on Route 12, along the Clearwater River which becomes the Lorchsa River.  A stop at Traveller’s Rest State Park taught us all about the Lewis and Clark expedition and about the study of the only confirmed (to date) campsite of that expedition which is in the state park. The archaeological process by which they confirmed the exact location of the camp is fascinating, involving the  rereading of old accounts, and the examination of old military camp layouts. Working from the estimated position of the sleeping spaces (they had, by that time, long lost their tents), archaeologists calculated the location of the  “sinks” or latrines and began excavating. Immediately they found, as expected, traces of mercury. Why mercury? It is known that the doctor who consulted with Lewis before the trip prescribed potent laxative pills (known colloquially as “Thunderbolts” for their explosive action) as the standard remedy for most ills. Lewis was persuaded and took a large supply which was administered to the troops as required. One of the key ingredients was mercury. The museum was most interesting with a display of items found there, plus lots of explanations about the routes taken by the expedition.  We walked the loop in the park to see the actual camp site.  There is not much to see, but as the wife of the historian Stephan Ambrose commented, “walking in the steps of Lewis and Clark makes your feet tingle.” The camp was here:

And the “sinks” were here:

The whole area of Traveler’s Rest is very pretty. 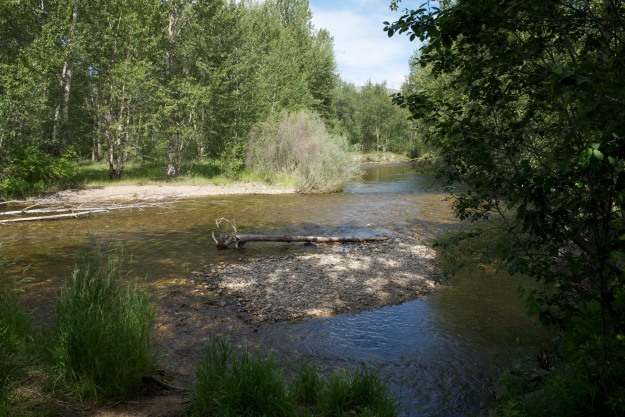 That night we camped in the Beaverhill State Park in a pleasant, if expensive, site and continued on the next day towards the Beartooth Pass leading into the northeastern entrance to Yellowstone National Park.  Fred was fascinated by the remains of the huge copper mines at Butte, Montana, previously worked by the Anaconda Copper Mine Company. We liked the look of the town of Red Lodge which is obviously a ski area town full of bistros and coffee shops but looked like a pleasant spot.  We spent the night and purchased diesel there before tackling the pass itself.  And what a pass, it was spectacular! We climbed to 10,700 feet passing from pine forests to alpine tundra meadows, from snow basins to jagged peaks, from frozen alpine lakes to vast vistas.  Needless to say, we have lots of photos! 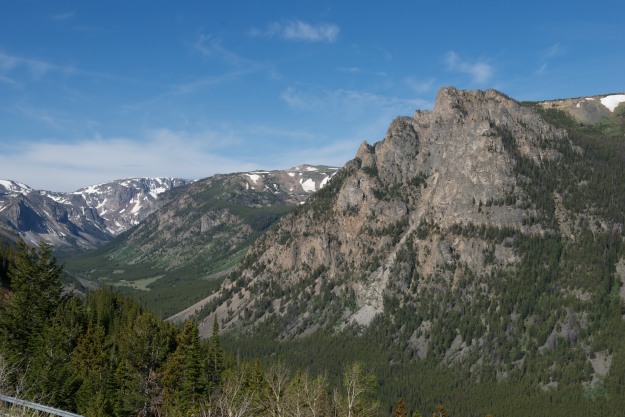 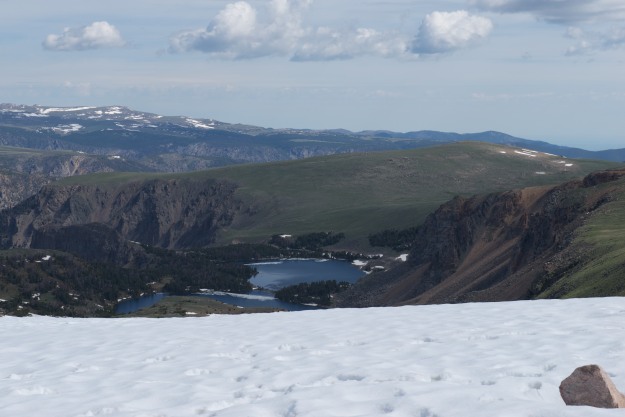 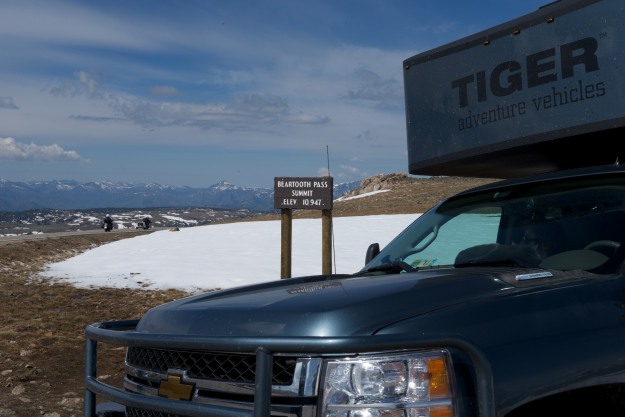 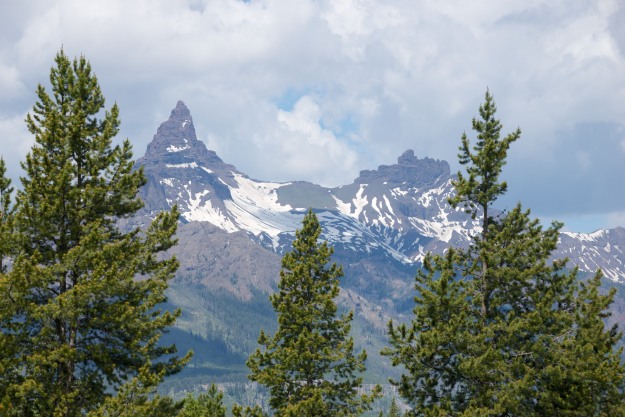 We stopped for slightly uninspiring lunch in a cafe in Cooke City. We were tired of our own food and, amazingly, the wait and kitchen staff were all Ghanian. We then headed into the Park.  The Lamar Valley is supposed to be one of the best places to view the Yellowstone wildlife and as Denise was anxious to see bison, we kept our eyes open.  And we were rewarded by a number of herds of bison, most in the distance.  One bison  did walk across the road in front of us, which was fun. 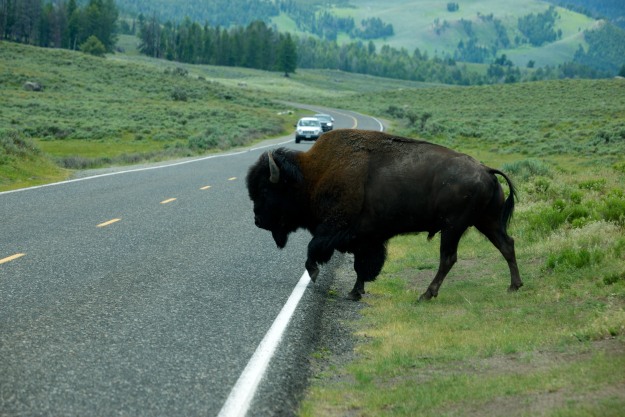 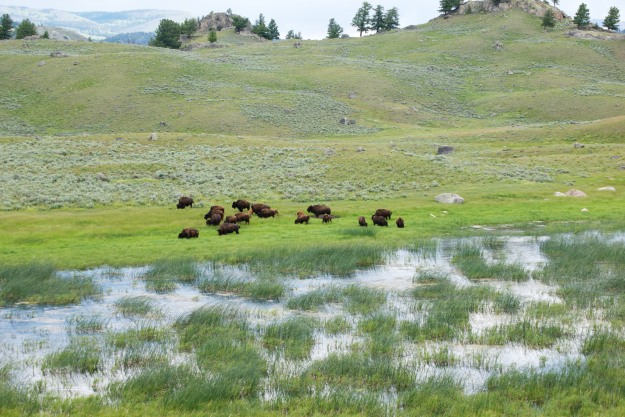 We also caught sight of a couple of elk and some pronghorn deer.  We were heading to the Eastern exit to camp when we stopped at the Sulphur Cauldron to view the steam and bubbles coming out of the earth (and even out of the car park at one point!).

We then walked over to see the Mud Volcano, the Dragon’s Mouth spring and cave and various other cauldrons.  Fred especially marveled at the Dragon’s Mouth, where the gases exploded and caused the water inside the cave to rush out making a roaring noise.

Climbing the hill we saw this bison at the edge of a pool of roiling (not boiling) water. He was so still that, at first, we wondered if he was some form of statue.

The smell of sulphur is strong and can be unpleasant.  At least, Denise thought so!  Fred was fighting a headache and it was getting late by now as we had been quite fascinated by what we saw.  So when we saw that the RV park at Fishing Bridge still had space, we bit the bullet, took a space in what is essentially a parking lot with hook ups, paid over lots of dollars and had a place to spend the night though we had to fight the mosquitoes for it!  We were up at 5.30 A.M. and off by 7.45 A.M.  We wanted to see “Old Faithful”, the most famous geyser of Yellowstone, and, if possible, with only a couple of hundred other people rather than a couple of thousand.  It was about an hour’s drive and we were thrilled to have an elk cross the road in front of us.  Again no photo as it was not a safe place to stop.  We headed for the parking lot and had our choice of spaces so we took one in the shade and headed in the direction of the people streaming out of the parking area.  We stopped at the Visitor Center and acquired a guide to the area, as well as browsing the books and offerings in the shop.  We started a ranger guided walk at 9.30 but it was a rather unwieldy group so we moved on and found a good spot to view “Old Faithful” from the back of the Old Faithful Geyser Loop.  The geyser performed, on schedule, hurling water about 150 feet high. 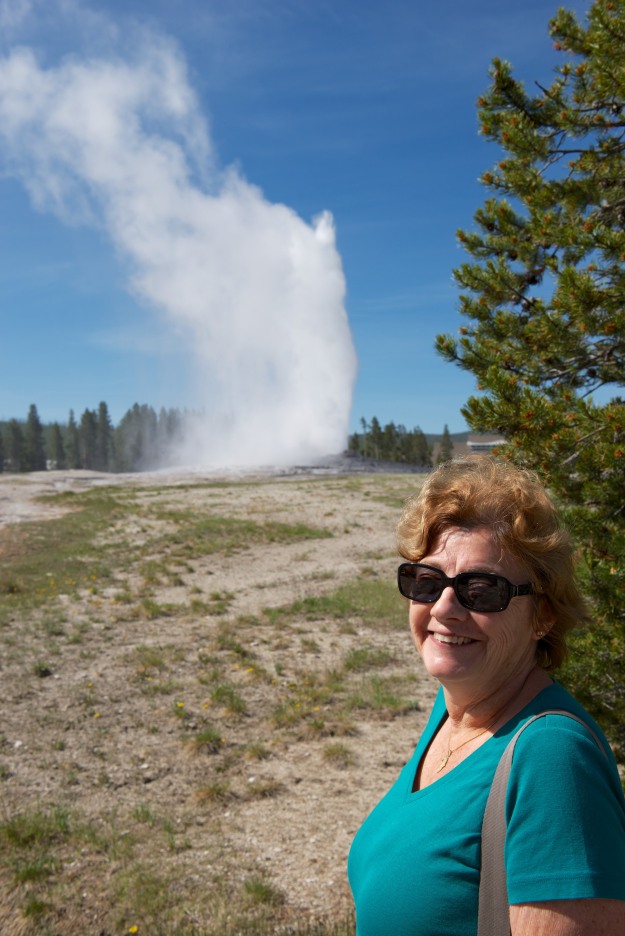 We then set out to wander the Geyser Hill Loop which passed by various other geysers most of which are unpredictable from an eruption point of view.  We did, however, see Bee Hive, which erupts twice a day though on an irregular schedule, begin its pre-eruption characteristic, so we kept an eye on it and were indeed rewarded with an amazing eruption with the narrow cone projecting water more than 175 feet high.  And we were much closer to it than we had been to Old Faithful.  In fact, we had to change our viewing spot so as not to get soaked.  Needless to say, we do have photos of both eruptions! 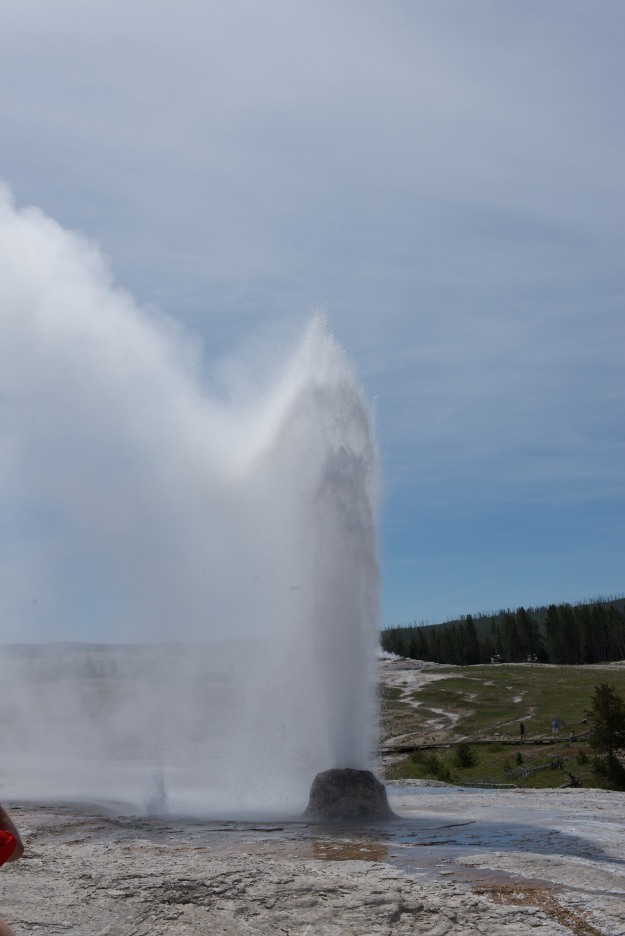 The rest of of geyser hill offered wonderful views of geysers of many different geysers. 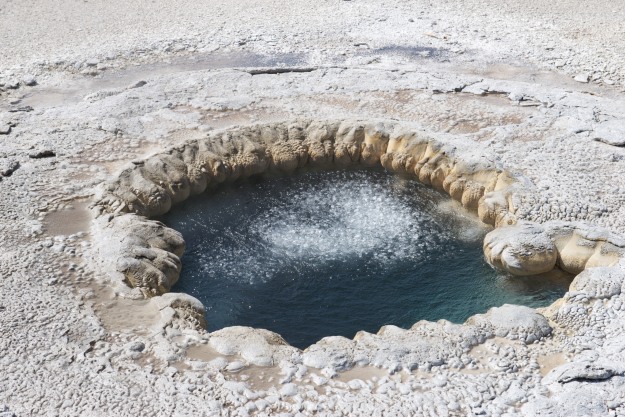 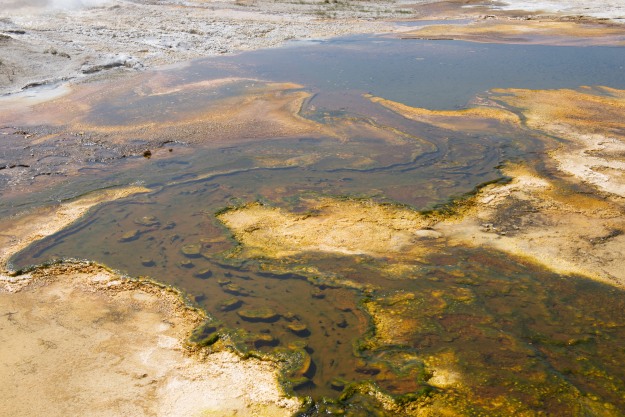 The Ranger on our tour had mentioned the good ice-cream at the Old Faithful Inn, so we headed in that direction to boost our blood sugar levels after all this excitement.  We sat on the fence and watched Old Faithful erupt again as we enjoyed the excellent ice cream and then headed for the car pack.  This had degenerated into a mob scene with cars going in all directions hunting for a space.  The hordes were arriving, and bus after bus was pulling in; so we were delighted to leave our space for someone else and head south out of the park and into the Grand Teton National Park via another scenic route (of course!).

We did not stop in the Grand Teton park, just drove through it on the main road.  We were stunned however to see a huge herd of bison, some of whom were very close to the road so we did stop for a half hour or more and lots of photo taking while we watched them.  Bearing recent injuries to tourists in mind, we did not approach too closely but used a telephoto lens with excellent results.  The views in Grand Teton are unbelievable as the craggy, snow covered peaks just rise up with no foothills.  Quite amazing and very beautiful. 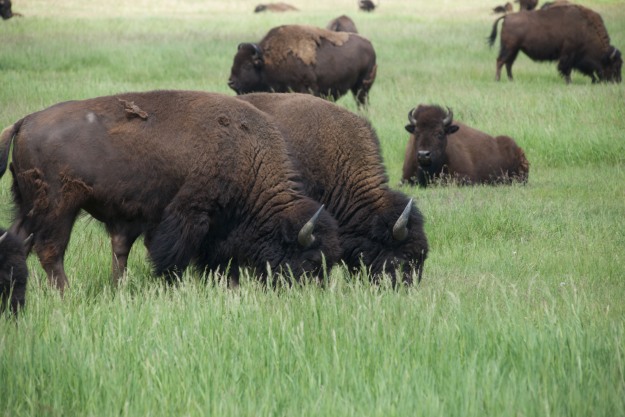 How tourists get hurt. 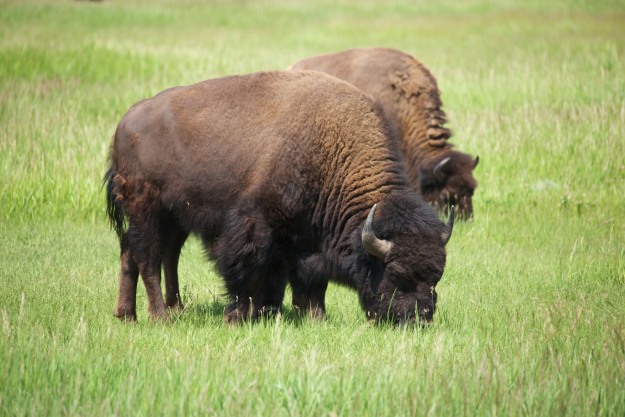 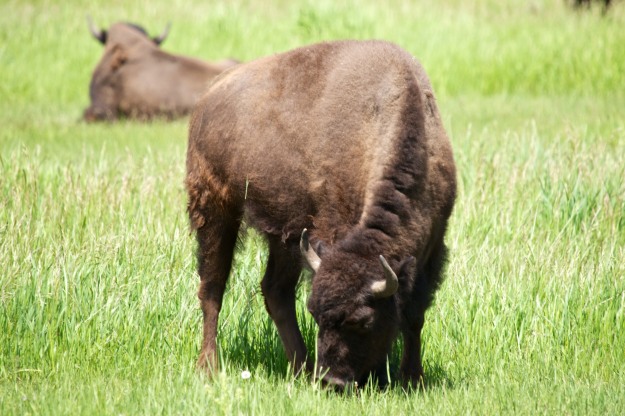 We continued south looking for a campsite and stopped at the Warren Bridge campsite, a BLM recreation area, south of Jackson Hole.  It looked very bleak as we arrived with barely a tree in sight, but we enjoyed our time there.

The hosts were charming, the pronghorn deer wandered by and the ground squirrels were cute!

Our next stop was to be the Tiger Owners Rally, near Leadville so we had a long day’s drive ahead of us.

1 thought on “On to Yellowstone”