We headed south through Quebec on the first rainy day we had experienced in ages! So, as we had no campground reservation, our priority was a stop at the campground we had selected as our first choice, Camping de la Fort de la Martiniere (http://www.campingdelamartiniere.com/index_en.html) where we hoped to spend three nights. There was room for us and we verified the information we had seen on the campground website about how we were going to get to Quebec City across the river the next morning. And yes, there really is a fort de la Martiniere, right next to the campground; http://www.fortwiki.com/Fort_de_la_Martiniere

Next morning dawned bright and sunny though cool and we set off on our day’s jaunt. This involved first a fast walk to the bus stop about a kilometer away (a fast walk as we were a little late leaving and did not want to miss the bus). The bus arrived on time and we then had a pleasant 20 minute ride to the ferry terminal. We paid for round trip tickets and went on board the ferry to Old Quebec. It was rather nice to have a short cruise across the river included in our day! (https://www.traversiers.com/en/our-ferries/quebec-city-levis-ferry/home/)

Quebec from the river with our twin ferry leaving the Quebec side.

Once there, we disembarked and headed for a cup of coffee. We went up a narrow staircase to the Rue Petit Champlain and found a lovely coffee shop, open to the street where we could view the passers by and catch our breath. (https://www.chocolateriegigi.ca) The coffee and the goodies were wonderful! The streets in the old section were narrow, decorated with a myriad of flower baskets and pots and charming in a very European way. They were also packed with tourists. And of course hearing French spoken all around made it seem quite European, even if the accent was quite different. 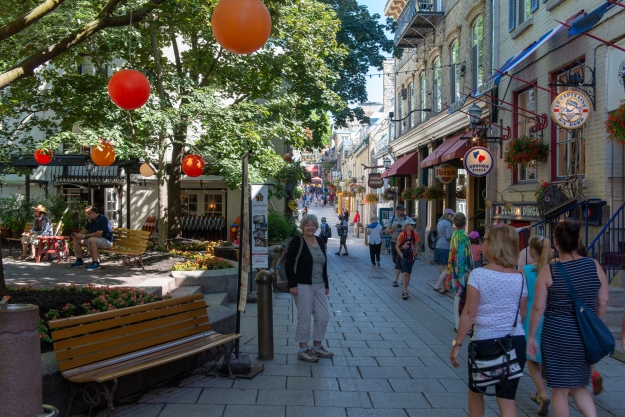 We wandered up the street to the Place d’Armes (which brought back memories of Plazas de Armas, squares of the same name all over South America) via the nifty funicular, a kind of open air elevator.

From the Place d’Armes we could enjoy views of the Fairmont Chateau de Frontenac, the iconic hotel which overshadows the city and is in every postcard. (https://en.wikipedia.org/wiki/Château_Frontenac)

Fairmont Hotel. The funicular top terminal is just to the right of the picture — looks like a door.

Alas, the timing was wrong for tea! (But then we probably could not have afforded it. And we’ll skip our usual rant about the Canadians ending tea service just when it should begin!)

We decided to take a hop on-hop off bus as these are usually a good way to get a feel for a new town and indeed we were taken on a tour of some of the outer areas which we would never have found.  We “hopped off” to have lunch on the Grande Allée. 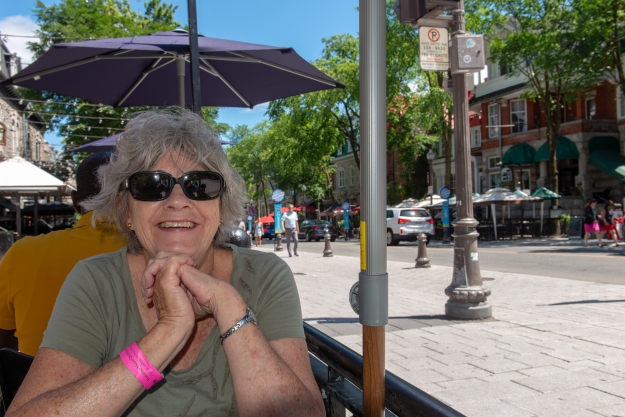 After lunch we walked across to the George V Square to the Museum of the Plains of Abraham. (http://www.ccbn-nbc.gc.ca/en/) Here was our opportunity to learn more about the role played by Quebec in the Seven Years War (or French and Indian War as it was known in the English colonies) in an excellent setting with lots of hand on information of the era and an excellent audio-visual portrayal of the Battles for Quebec. Our visit ended with a bus tour of the actual Plains, which, to our surprise were really hilly and not plains at all! We got off at one of the four Martello towers built in the surrounding area.  The tower was used to store armaments and for protection. Fred was intrigued – a type of fortification that he had never heard of! (https://en.wikipedia.org/wiki/Martello_tower)

The wooden roof is a concession to the bitter Quebec winters. In war time it would be removed. Fans of the Tower of London and similar Norman forts will recognize the external wooden ladder which leads to the only door, well above ground level.

Pivot gun replica. For those of you who have wondered how to load a Civil War era cannon …

We then walked back along the Governor’s Walk on the edge of the Citadel (a functioning military camp) to our coffee shop for another coffee, this time with ice-cream.  It was a long hike and we had earned our coffee. 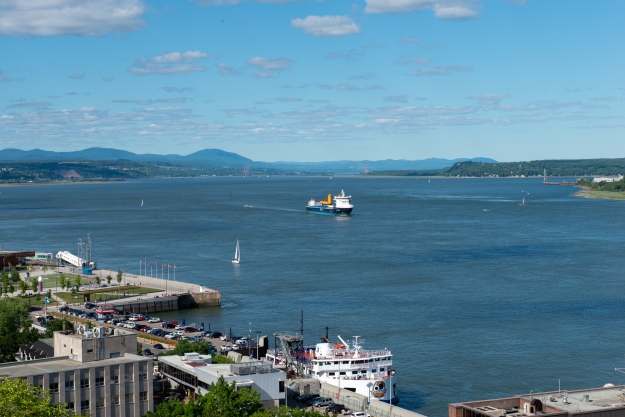 Heavy lift ship coming up the Saint Lawrence towards Montreal. 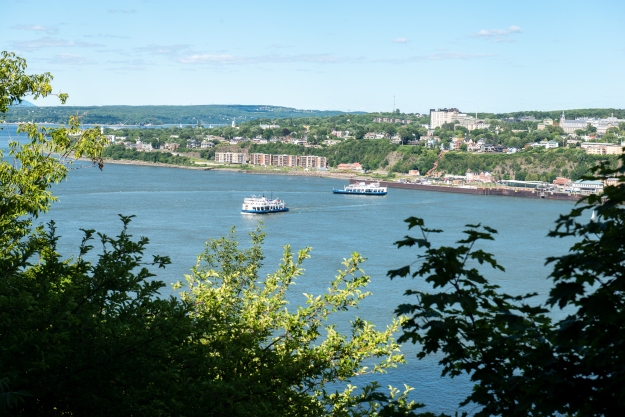 Ferrys passing mid river. Levis in the background. Our campground was some miles beyond, down the river to the right of the picture.

Then back to the ferry for the trip back to our campsite. We had to run and jump in front of the bus, but the driver was charming and helped us find our stop. The “forumule” of bus and ferry was a hit!

The next day we decided that the weather was too nice for a museum (although the Musee de la Civilization did beckon) so we headed to the Montmorency waterfall. This involved crossing the St. Lawrence on a bridge that prohibited trucks (Ooops!) and a sojourn through a residential neighborhood or two – funky GPS! The falls are quite spectacular even in a time of drought and after admiring from below, we took the cable car up to the top.

There we crossed the suspension bridge to admire the falls from above. 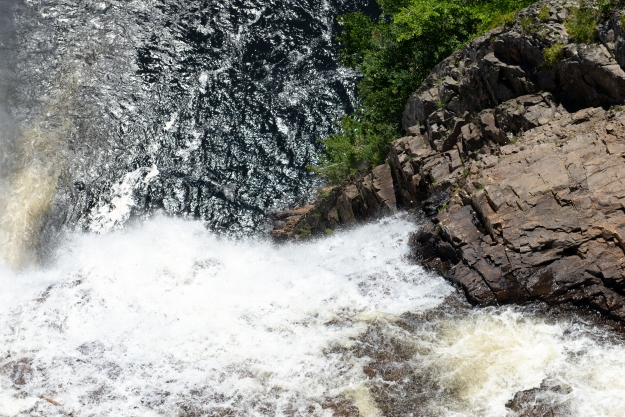 After our return to the base of the falls, we wandered closer to the actual falls, to the point where the spray was getting us wet.

Back at the campground we enjoyed the spectacle of a cruise ship coming up the Saint Lawrence in the sunset. 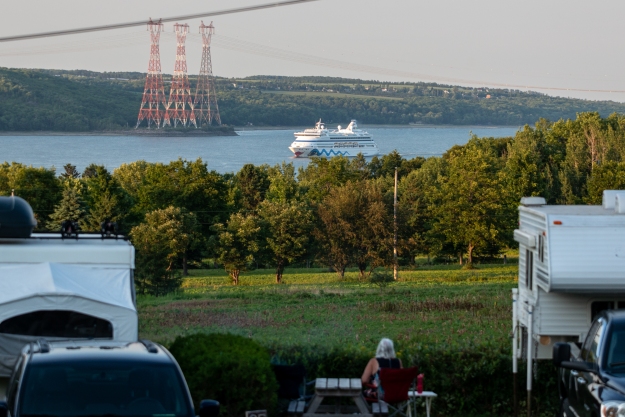 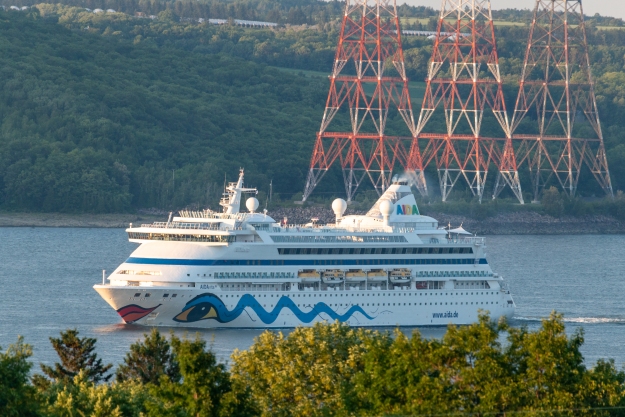